Update Required To play the media you will need to either update your browser to a recent version or update your Flash plugin.
By Faith Pirlo
08 July 2022


Hello! This week on Ask a Teacher, we will answer a question from Tahir about the difference between linking verbs and helping verbs. 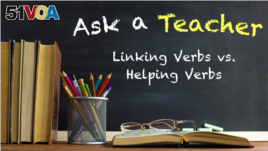 What is the difference between the verb "is" in these two sentences?

He is a doctor.

Is he a doctor?

Thank you Tahir for writing to us. Before I answer your question, let's talk about the difference between linking verbs and helping verbs.

A linking verb connects the subject of a sentence with more information about the subject. It is not an action verb. The verb "to be" and all of its forms are the most common linking verb. Other linking verbs include, "become," "seem", and sense verbs like "feel" and "smell" in some sentences.

Here is an example of a linking verb.

The verb in this sentence, "is," connects the subject "my cat" to more information about him - that he is 3 years old.

Helping or auxiliary verbs are also used along with a main verb. Auxiliary verbs "help" the main verb and the rest of the sentence by giving additional information about the verb, like tense.

We have three main helping verbs in English "be," "do," and "have."

Here is an example of a helping verb.

My cat is watching birds from the window.

In the sentence the helping verb is "to be" in the third person singular (is). It is helping the verb "watch" along with the present participle ending –ing to become the present progressive tense.

In this sentence, the verb "is" cannot stand on its own. It needs a main verb, like "watch."

Back to your question, Tahir.

In your first example the verb "is" is a linking verb.

He is a doctor.

The verb "is" connects the subject of "he" with the rest of the sentence that describes the subject. Here the verb "is" can stand on its own without another main verb. So it is not a helping or auxiliary verb.

The second example is actually a yes or no question.

We switch the verb to the first position and the subject to the second position to get a question.

Is he a doctor?

In this question, "is" has a special status called an operator. It does not need another helping or auxiliary verb to make a question because it had the role as a linking verb in the original sentence.

Here is another example of a linking verb changing to an operator within a question:

Is Washington, D.C. the capital of the United States?

The answer would be of course "Yes, Washington, D.C is the capital of the United States."

In the sentence, the linking verb "is" connects Washington D.C. with the rest of the information about the city.

To tell if the verb "to be" is a linking verb or a helping verb, see if there another verb in the sentence.

If there is, then "to be" acts as a helping or auxiliary verb.

If "to be" is alone and connects the subject to more information about it, then it is a linking verb.

Please let us know if these examples and explanations have helped you, Tahir!