Update Required To play the media you will need to either update your browser to a recent version or update your Flash plugin.
By George Grow
29 April, 2015


Trafficking of synthetic, or man-made, drugs is growing across much of Southeast Asia. United Nations officials say the growth is being helped, in part, by rising demand and by use of the Internet. They want stronger controls on what they call precursor chemicals -- those used to make synthetic drugs.

The UN's Office on Drugs and Crime says drug production and trafficking is expanding in both East Asia and Southeast Asia. It also says the drug trade is diversifying -- moving into new products outside international control.

The agency says legal chemicals are being used in drug production. It says there is a growing need to stop that from happening. 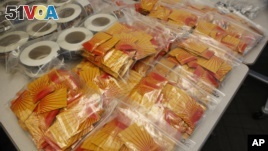 Confiscated synthetic drugs are on display at a news conference at the DEA offices in Centennial, Colo., on Wednesday, May 7, 2014.

More than 200 government officials from 39 countries traveled to Bangkok for the conference, which was held this month. Jeremy Douglas is the agency's representative in Asia. He told the delegates the drug problem has worsened.

"It is important that this conference is here in Asia, where most of the precursor chemicals are produced and where, as it was pointed out, significant drug production is taking place. If we are to make headway on the drug production situation here and in other regions, we need to have effective international control."

Officials say Myanmar is the place where criminals produce the largest amount of synthetic drugs. The country is also known as Burma. The officials say traffickers bring precursor chemicals into Myanmar, then transport the drugs back across its mostly unguarded borders to markets in China, Thailand and other countries.

Thailand's Justice Minister spoke at the conference. Paiboon Koomchaya said there appears to have been little progress in recent months to control precursor chemicals in Asia.

"In the year 2013, we raised awareness of all the countries, but we have not come up with a clear measure yet of how the manufacturing countries, importing countries and all the relevant parties -- how are we going to control precursor chemicals effectively in our region?"

UN law enforcement officials say there are hundreds of synthetic drugs known as new psychoactive substances. They noted that just 10 of these have been listed as controlled substances, meaning sales are restricted. And they say many criminal organizations sell drugs on the Internet. This creates a problem for law enforcement.

"This is the heartland or the center point production. Asia is where the precursors are largely coming from."

Officials at the Bangkok meeting talked about developing an Asian policy for dealing with the problem. They also spoke about strengthening border security. The policy plans are being prepared for a UN General Assembly Special Session on the worldwide drug trafficking problem, to be held next year.

Ron Corben reported this story from Bangkok. George Grow wrote it for VOA Learning English. Christopher Jones-Cruise was the editor.

precursor – adj. something that comes before something else

diversify – v. to change something so that it has additional things (or kinds of people)

session – n. a meeting or series of meetings