Little Progress in Effort to Save Vaquita

Update Required To play the media you will need to either update your browser to a recent version or update your Flash plugin.
By Hai Do
11 April 2022


The vaquita is one of the smallest members of the dolphin and whale family. Today, the animal is in danger of disappearing.

The World Wildlife Fund estimates that about 10 vaquitas are left in the world. Last September, scientists found two baby vaquitas in the wild. The discovery was a sign of hope. But biologists fear that more vaquitas die each year than are born.

A vaquita is about 1.5 meter long. Its name means "little cow" in Spanish. The mammals only live in the northern part of the Gulf of California in Mexico. They are most often found close to the coast and quickly swim away if a boat nears them. 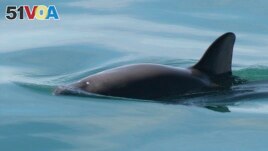 This undated photo provided by The National Oceanic and Atmospheric Administration shows a vaquita porpoise. On Thursday, July 26, 2018. (Paula Olson/NOAA via AP)

The creatures were first discovered by humans in 1958. They can live for at least 21 years. Females are believed to give birth every other year to a single offspring between February and April.

The vaquita population was estimated to be around 600 in 1997. The organization Save the Vaquita said the population decreased 90 percent between 2011 and 2016.

Vaquitas are often caught in fixed fishing nets used to catch fish such as totoaba. Fishermen catch the endangered totoaba illegally for its swim bladder, which they then sell to China at high prices. In China, the swim bladders are used in cooking and are believed to have medicinal value.

In 2017, the Mexican government banned the use of such nets in the area to help save the vaquita. In January, the Mexican Navy and the environmental group Sea Shepherd began a campaign to protect the rare animal's habitat in the Gulf of California.

To prevent illegal fishing, local fishermen must pass a government inspection. But the Reuters news agency recently reported that it observed fishermen entering the sea in places where they could avoid inspection.

Zak Smith is a director with the Natural Resources Defense Council. He said there was always a "good story" to be told about what was being done for the vaquita.

But he said, " As as soon as the cameras go away or the interest of the parties fades, all of those efforts go back to where they were."

Hai Do wrote this story for Learning English with additional reporting from Reuters.

bladder - n. a small sac that holds air for fish