Update Required To play the media you will need to either update your browser to a recent version or update your Flash plugin.
By Christopher Cruise
23 January, 2015


Last January, representatives from more than 20 of the world's largest clothing manufacturers wrote a strong letter to the Cambodian government. The companies asked the government to investigate the killings of at least five garment workers. Cambodian security forces shot and killed the workers during violent demonstrations earlier in the month.

But one year after the letter was sent, it seems little progress has been made in the investigation.

The killings of the garment workers were reported throughout the world. The workers died while protesting in support of an increase in the lowest wage permitted under Cambodian law. At the time, the minimum wage was about $100 a month.

The violence came at a time of political unrest in the country because of disputed elections. After the killings, many well-known clothing manufacturers demanded an investigation. The companies included H&M, adidas, PUMA and Levi-Strauss. All of them make clothing in Cambodian garment factories. 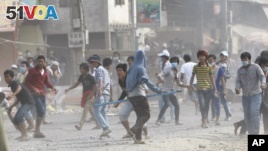 The manufacturers sent a letter to Prime Minister Hun Sen. The letter demanded that the government punish the killers. But one year later, the killers have not been charged.

A spokesman for Cambodia's Interior Ministry told VOA that the government sent its request for an investigation to the courts nearly a year ago. VOA sought repeatedly and unsuccessfully to speak with a court official about what had happened to the request.

Dave Welsh leads the Cambodia office of the Solidarity Center, a not-for-profit group. He told VOA that he believes there has been no true effort to hold anyone responsible.

Garment manufacturing is important to Cambodia's economy. Garment factories employ 600,000 people. That is more than any other employer. The garment industry is also Cambodia's largest source of money from other countries. The factories export more than $5 billion worth of clothing, mostly to the United States and European Union countries.

VOA spoke with representatives of four of the companies that signed the letter: PUMA and adidas, both based in Germany; Levi-Strauss, based in the United States; and H&M, based in Sweden.

H&M refused to comment. PUMA said it would only talk about the letter in partnership with the other businesses that signed it. A spokesperson for Levi-Strauss told VOA the company was continuing to persuade the Cambodian government about the need for an investigation. An official with adidas told VOA that the company had raised the issue with the Ministry of Justice up to the end of last year. The official said in an e-mail that adidas is waiting for an answer from government officials.

Joachim Baron von Marschall is the German ambassador to Cambodia. He says German embassy officials have spoken about the investigation with representatives of German clothing companies. And, he says, they have taken part in talks on the issue with ambassadors from other EU countries and with the Cambodian government.

Mu Sochua is a leading member of Cambodia's political opposition and serves in parliament. She has worked for many years to support and protect garment workers. She says she will meet with families of the victims in the next few weeks. She says she wants to know if they want to make an official complaint about the investigation with parliament.

Dave Welsh notes that failure to punish the killers is just one of many of the government's illegal actions.

"And on all these other issues -- the shootings, the deaths, the convictions, wrongful convictions in my mind, of 23 activists, massive terminations, lawsuits against every independent trade union leader in the country that are still ongoing -- there's been no resolution. All these things are still outstanding."

He says all of these failures should be seen against a backdrop of threats against Cambodia's labor unions.

This report was based on a story from reporter Robert Carmichael in Phnom Penh. Christopher Cruise wrote it for VOA Learning English. George Grow edited the story.

impunity – n. freedom from punishment, harm, or loss; usually used in the phrase "with impunity"

foreseeable – adj. can be seen but which has not yet happened

absorbe(d) – v. to accept or deal with (something that is difficult or harmful)

ignore(s) – v. to do nothing about or in response to (something or someone)

termination(s) – n. the act of making a person leave a job; the act of firing or dismissing someone

Are there many clothing factories in your country? Are the workers well paid or poorly paid? How does your government react to demands for investigations of acts by security forces? Are unions accepted in your country? We want to hear from you. Write to us in the comments section.