Update Required To play the media you will need to either update your browser to a recent version or update your Flash plugin.
By John Russell
03 September 2022


Government agencies and volunteer groups in many places are using sea creatures to protect coastal areas from storms and rising sea levels.

The idea is that large groups of oysters, known as colonies, can help reduce the power of waves. Powerful waves can damage lands along the edge of ocean waters.

Denise Vaccaro's home was destroyed 10 years ago in Superstorm Sandy, a big storm that affected the U.S. Northeast coast. The beach she loved is also gone, claimed by rising seas that are damaging the shoreline. 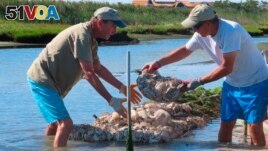 Workers place bags of shells containing baby oysters into the water in Beach Haven, N.J. on Aug. 19, 2022 as part of a project to stabilize the shoreline by establishing oyster colonies to blunt the force of incoming waves. (AP Photo/Wayne Parry)

"It's so sad that this little community has lost its beach," Vaccaro said. "People are losing their property. My home was totally destroyed. It's a way of life that's being lost."

Many people around the world have had similar experiences. Once beautiful beach communities are washing away, and the people living there are having problems dealing with the changes.

Oysters may play an important part in dealing with the problem.

Oysters are central to a project that is taking place near Vaccaro's rebuilt house. The project is being carried out by the American Littoral Society. It received $1 million from the New Jersey Department of Environmental Protection. The group has been building steel wire containers, filling them with rocks and whelk shells and positioning them along the shoreline of Barnegat Bay.

Tiny baby oysters, called spat, are attached to whelk shells and placed in the bay near the existing cages to further stabilize the shoreline.

The shoreline in Vaccaro's neighborhood has lost 46 meters of beach since 1995, the Littoral Society says.

The oysters appear to be doing their job. One recent day, a strong east wind blew across the bay. But between the oysters and the shoreline, the water was much calmer, and waves gently went onto the shoreline instead of hitting it with force.

As an added benefit, the oysters help improve water quality in the bay. The Associated Press reports that a single oyster can filter up to 190 liters of water a day.

A few kilometers south, a group called ReClam the Bay is building an oyster reef to protect the shoreline of Mordecai Island. People do not live on the island, but it protects the shoreline of Beach Haven, a town on Long Beach Island.

Volunteers fill bags with 16 kilograms of whelk shells, to which millions of baby oysters have been attached. Then volunteers move them out to the reef a few hundred yards into the ocean. They have placed 10,000 bags of oysters and whelk shells there since 2015.

"In the last 100 years, Mordecai Island has lost 35 percent of its size," said Jack Duggan, a longtime volunteer with the group. "If we do nothing, in 40 years the island will be gone — just washed over. This island protects Beach Haven from taking the force of all that wave action."

Governments and volunteers in other places are taking similar steps.

In New York, city, state and federal agencies are building "living shorelines" along the southwestern end of Long Island. They use oysters, shells and native plants.

The Oyster Recovery Partnership in Maryland has placed billions of oysters on shells in Chesapeake Bay in a project set to run through 2025. In Florida, volunteers and researchers established oyster colonies along parts of the Peace River in Punta Gorda.

In Argyll, Scotland, a group called Seawilding began restoring in 2020 a place near a coastal area that had been damaged. They restored more than 300,000 oysters there. Also in Scotland, a project aims to restore 30,000 oysters near Edinburgh.

Vaccaro said her New Jersey home may well depend on the success of many small oysters.

"If we don't do anything, we're not going to have any of these houses," Vaccaro said. She added, "I saw what happened and I see what can happen again."

Wayne Parry reported on this story for the Associated Press. John Russell adapted it for VOA Learning English.

beach – n. an area covered with sand or small rocks that is next to an ocean

whelk – n. large snail that lives in the ocean

restore – v. to put or bring (something) back into existence or use; to bring (someone) back to an earlier and better condition — usually + to