Llama Antibodies Could Help in Fight Against Coronavirus

Update Required To play the media you will need to either update your browser to a recent version or update your Flash plugin.
By John Russell
28 August 2021


Llama antibodies could soon be playing a part in the worldwide fight against COVID-19, if tests being done by a Belgian company live up to their early results.

Researchers from the VIB-UGent Center for Medical Biotechnology in Ghent say antibodies taken from a llama named Winter have reduced the spread of coronavirus infections, including variants, in laboratory testing. 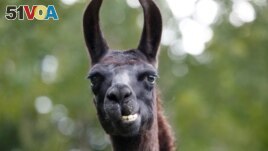 A llama called Winter, whose antibodies were used in the hunt for a treatment for the coronavirus disease (COVID-19), stands in a meadow in Genk, Belgium August 23, 2021. (REUTERS/ Johanna Geron)

Tersago described the technology as a possible "game-changer," which means something that has a big, good effect on a situation.

The technology's aim is to help rather than replace vaccines. It could possibly be used to help protect people with weaker immune systems and treat infected people in hospitals.

Unusually small, llama antibodies are able to attach, or bind, to part of the virus's protein spike. Tersago said, "at the moment we're not seeing mutations of a high frequency anywhere near where the binding site is."

Neutralization means to stop something from being effective or harmful.

Researchers expect tests in healthy volunteers to be similarly effective.

Along with other llamas and members of the camel family, Winter produces antibodies that are smaller, easier to reproduce and have more uses than those of other mammals, said VIB-UGent group leader Xavier Saelens.

"Their small size... allows them to reach targets, reach parts of the virus that are difficult to access with conventional antibodies," he said.

The current research follows studies from 2016 into llama antibodies to help deal with the SARS and MERS coronaviruses. France's Sanofi paid $4.6 billion for Ablynx, a Ghent-based medical company that does llama antibody research, in 2018.

Winter, whose antibodies can now be reproduced in the lab, is enjoying retirement in a private art and animal park in Genk.

Clement Rossignol reported on this story for Reuters. John Russell adapted it for Learning English. Susan Shand was the editor.

immune system- n. the system that protects your body from diseases and infections

spike – n. An area that protrudes from the envelope of some viruses

mutation – n. biology : a change in the genes of a plant or animal that causes physical characteristics that are different from what is normal

frequency – n. the number of times that something happens during a particular period

pharmaceutical – adj. of or relating to the production and sale of drugs and medicine

access – v. to be able to use, enter, or get near (something)