Lockdowns in Place in Vietnam Ahead of VP Kamala Harris’ Visit

Update Required To play the media you will need to either update your browser to a recent version or update your Flash plugin.
By Bryan Lynn
23 August 2021

The city is currently facing its worst outbreak of the COVID-19 pandemic. The new restrictions include an order for people living in "high risk" areas to stay at home. The measures will remain in effect for at least two weeks.

Police and army troops have deployed around Ho Chi Minh City to enforce the stay-at-home order, or lockdown, and to help get food and supplies to the people.

Vietnam's Health Ministry reported 737 virus-related deaths on Sunday, the country's highest single-day total. That raised the total number of deaths to 8,277 since the pandemic began.

In the north, Vietnam's capital, Hanoi, is also under a lockdown order. Hanoi is where Vice President Harris will spend her time in the country. She is set to arrive on Tuesday for a three-day visit. 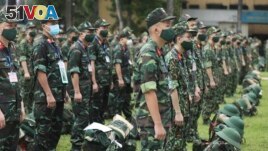 Army soldiers line up during a ceremony to send off military doctors to Ho Chi Minh City to help with treating COVID-19 patients in Hanoi, Vietnam, Monday, Aug. 23, 2021. (Bui Cuong Quyet/VNA via AP)

During her stay, Harris is expected to meet with Vietnamese leaders, including Prime Minister Pham Minh Chinh. State-run media reported her talks will center on Southeast Asia security issues, economic cooperation and the COVID-19 situation.

Harris also plans to attend the opening in Hanoi of an office of the U.S. Centers for Disease Control and Prevention (CDC). The office is meant to be a center for dealing with infectious disease issues across Southeast Asia.

Vietnam had been praised for keeping its COVID-19 cases largely under control through most of the pandemic. But the fast spread in recent months of the Delta variant of the coronavirus has caused the country's worst outbreak by far. More than half of the country's 98 million people are currently under lockdown orders.

It is hoped the new severe restrictions in Ho Chi Minh City will reduce the infection rate among its 10 million people and ease pressure on overloaded hospitals.

Harris is expected to discuss how U.S. assistance programs can help Vietnam deal with the health crisis. So far, the U.S. has been the country's largest donor of vaccines, sending 5 million doses of Moderna's shot.

Separately, Vietnam has signed agreements with American vaccine makers Moderna and Pfizer to secure at least 80 million vaccine doses. Vietnam aims to vaccinate 70 percent of its population with at least one shot by the first quarter of next year.

During a visit by U.S. Secretary of Defense Lloyd Austin last month, the U.S. announced plans to donate 77 low temperature freezers to help Vietnam store and give out vaccines.

The U.S. Agency for International Development (USAID) says the United States has promised to provide more than $20 million dollars in virus-related assistance to Vietnam.

The Associated Press reported on this story. Bryan Lynn adapted the report for VOA Learning English. Susan Shand was the editor.

dose – n. the amount of a medication to be taken at one time