Update Required To play the media you will need to either update your browser to a recent version or update your Flash plugin.
By Bruce Alpert
10 May, 2016


London's new mayor – a Muslim -- has rejected Donald Trump's offer to allow him to enter the United States.

Sadiq Khan was elected London's first Muslim mayor last week and took office Saturday. Trump, who is running for U.S. president as a Republican, said he would ban Muslims from entering the U.S.

Khan told the BBC Tuesday he rejected Trump's offer because it is an exception to a campaign promise that hurts Muslims who want to enter the United States to study, visit Disney World, or do business. A campaign promise is something a candidate says they will do if they win office. 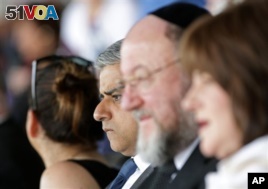 London's newly elected mayor, Sadiq Khan, center, sits with Ephraim Mirvis, Chief Rabbi of the United Hebrew Congregations of the Commonwealth, at the Yom HaShoah ceremony at Barnet Copthall Stadium in London, Sunday May 8, 2016. Khan joined an annual memorial to the millions of Jews slain in the Holocaust as his first official act as mayor. (Yui Mok/PA via AP)

"This isn't just about me, it's about my friends, my family and everyone who comes from a background similar to mine, anywhere in the world," Khan said to the Associated Press.

Trump said he would temporarily ban Muslims from traveling to the U.S., after last year's terrorism attack in California. He said the United States needs to be protected against terror attacks.

Asked by the New York Times this week how his ban would affect Khan, Trump said: "There will always be exceptions."

Trump also said he is happy Khan was elected mayor.

"If he does a good job, and frankly if he does a great job, that would be a terrific thing," Trump said.

Earlier, Khan joked he might have to visit the United States quickly in case Trump is elected and takes office next January. Khan told the BBC Tuesday he supports the Democratic Party's leading presidential candidate, Hillary Clinton.

He said Trump's "ignorant" opinion of Islam "could make both our countries less safe – it risks alienating mainstream Muslims around the world and plays into the hands of extremists."

Khan is the son of Pakistani immigrants. His father was a bus driver. Khan earned a law degree, worked as a human rights lawyer and was elected to the Parliament as a Labor Party member.

He beat his conservative party opponent, Zac Goldsmith, to become London's mayor. Goldsmith tried to connect him to Islamic extremists. Khan said the charges are false.

Khan told the Washington Post that being the son of immigrants from a poor background and a religious minority "isn't held against you" in London.

"You are respected for who you are and what you put in," Khan said

frankly – adv. in an honest and direct way

alienate – v. to make someone unfriendly