Longest Lunar Eclipse of the Century

Update Required To play the media you will need to either update your browser to a recent version or update your Flash plugin.
By Hai Do
26 July, 2018

The longest lunar eclipse of the century will happen late Friday or early Saturday, depending on where you live.

The American space agency NASA says the moon will move into the Earth's shadow on Friday night. For four hours, it will be partly in the Earth's shadow. The total eclipse will last 1 hour 42 minutes and 57 seconds.

The eclipse will be visible to people in Europe, Africa and the Middle East on July 27 between sunset and midnight. Those who live in Asia and Australia will be able to see the eclipse between midnight and sunrise on July 28.

The eclipse will turn the light color of the moon to deep red. Scientists call this kind of moon a "blood moon."

Unlike a solar eclipse, people can look at a lunar eclipse directly with their own eyes.

On the same day as the eclipse, the planet Mars will be at its brightest as it travels close to Earth.

The eclipse, however, will not be visible from North America or most of the Pacific.

The next lunar eclipse of such length will happen in 2123. 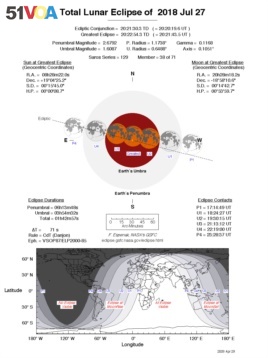 Hai Do adapted this story for Learning English based on NASA reports. Ashley Thompson. was the editor.

lunar eclipse - n. an occasion when the moon looks like it is completely or partially covered with a dark circle because of the Earth's shadow is on it

visible - adj. able to be seen

shadow - n. a area of darkness created when a source of light is blocked