A Look Back at 2015: The Year in Science and Technology

Update Required To play the media you will need to either update your browser to a recent version or update your Flash plugin.
By Anne Ball
27 December, 2015


Scientists and technology experts were busy in 2015.

From fighting climate change, to space exploration and developing drones, here is a look back at some of the science stories we covered at VOA Learning English.

Most recently, representatives from nearly 200 nations gathered in Paris to fight climate change. 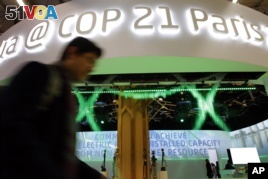 Almost every country agreed to limit a rise in global temperatures. They agreed that the world should not get any warmer than 2 degrees Celsius above what it was in the mid-1700s. The agreement says 1.5 degrees is an even better target.

This will require nations to reduce their greenhouse gases, like carbon dioxide. Those gases are released from the burning of fossil fuels, like oil and gasoline, and they are blamed for raising the temperature of the planet.

As the planet warms, ice melts at the north and south poles, the top and bottom of the planet. This can raise sea levels that flood low areas, like islands. Climate change also brings damaging storms, severe droughts and flooding, and widespread food and water shortages.

The agreement is supported by the United States and China, the two biggest greenhouse gases polluters in the world.

One of the biggest changes coming down the road: the ability of cars to drive themselves. Some day you may not need to drive a car. You will just program, or tell the car where you want to go, and it will drive itself.

Andrew Poliak, of automotive technology supplier QNX, says the technology is already here. "We expect self-driving cars to be a mainstream thing between 2020 and 2025."

Google, an American company, already has self-driving cars on the road, mostly in California. There is no steering wheel and no brake or gas pedals.

Water found on Mars, and other NASA stories

NASA scientists discovered water flows on the surface of Mars. The water is salty, and is only there part of the year. But it is an important discovery for the effort to send humans to live on Mars.

Michael Meyer is the lead scientist for the NASA Mars Exploration Program. He says water is one of the key things needed for sending humans to Mars.

Meyer explains: "Not only for the astronauts to drink, but also to make oxygen, to make fuel, and so having a ready resource there on the planet makes a big difference in terms of how much stuff you have to bring with you."

NASA hopes to send humans to Mars in the 2030s. Now, the space agency is recruiting new astronauts. Both the U.S. government and private industry are developing rockets and spacecraft to take those astronauts to Mars.

NASA is studying Kelly to see how humans survive long periods of time in the weightlessness of space. What they learn will help them plan human travel to Mars. Kelly and Kornienko are scheduled to return to earth in March 2016.

We got our first close up of one of the farthest away objects in our solar system last July. It took the New Horizons spacecraft nine years to travel nearly 5 billion kilometers to Pluto. It sent back pictures, showing the dwarf planet's detailed icy landscape— including mountains, glaciers and craters.

Speaking of space ... there was this good news: Not to worry-- researchers say do not fear an alien invasion. People have been searching and listening for life on other planets. They say we should not be concerned about alien beings any time soon.

Drones made their way to our website and Facebook pages quite a few times. They are small aircraft controlled by remote control. The FAA, the U.S. federal agency that governs drone use, came up with new rules recently. Drones used in the U.S. will have to be registered with the federal government. Earlier, the company Amazon received a patent for drones that deliver packages.

In France, drones are helping farmers examine their crops.

These can be helpful machines. Drones are also being used to help animals in trouble of becoming extinct, or disappearing forever. In Africa, drones have been designed to help find poachers—people who illegally kill rhinoceros and elephant for their horns and tusks.

It has been a year of insects and animals in trouble of disappearing-- from rhinos to bees and tigers.

At the North Pole, Arctic polar bears are threatened because climate change is melting ice there. It means they are losing their territory at the top of the world.

Meanwhile, at the bottom of the Earth, scientists found fish and other sea creatures under the ice on the Ross Ice Sheet, off Antarctica. They were surprised to see organisms swimming and crawling in icy waters under the ice sheet. It is the farthest south that fish have ever been seen.

Unfortunately, the same cannot be said for some warmer waters. Scientists studied coral reefs in the U.S. Virgin Islands in the Caribbean. They also studied reefs in Hawaii. And they found that sunscreen from people swimming around the reefs is killing the beautiful coral. Other things harming the coral include pollution, warmer seas and overfishing.

In South Africa, scientists found bones in a cave they say are a new kind of early human ancestor. Those ancestors lived more than 2 million years ago. The people who found it named it Homo naledi, but it is not a direct ancestor of modern-day people.

This is also the 40th anniversary of the discovery of Lucy. At 3.2 million years old, Lucy was the oldest human ancestor found at the time. She was found in Ethiopia.

Anne Ball wrote this story. Kathleen Struck was the editor.

mainstream – n. the ideas, beliefs or activities regarded as normal

recruiting –v. finding the right people to join an organization

solar system –n. our sun and the planets that move around it

patent –n. official document that gives a person or company the right be the only one to make or sell a product for a certain amount of time

human ancestor –n. a person who came before modern humans, one of the people from whom humans descended