Look for Patterns to Improve Your Writing and Speaking

Update Required To play the media you will need to either update your browser to a recent version or update your Flash plugin.
By VOA
27 December, 2016


Editor's Note: This week, we revisit one of the most popular Education stories of 2016.

In the Education Tips series, education experts in the United States give you tips about how you can improve your English skills. After an interview with Eli Hinkel, a professor at Seattle Pacific University, John Russell wrote about patterns in the English language.

For VOA Learning English, this is the Education Report.

Eli Hinkel, a professor at Seattle Pacific University, says that English learners need to learn to recognize patterns in the English language.

These patterns, she says, are actually phrases – terms or expressions that relate to speaking and writing. 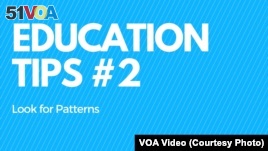 So, what exactly are these phrases?

Here is a real-life example. The author of this story sent an email requesting a time to speak with Hinkel.

The email was similar to this one:

"My name is John Russell, and I work for the Learning English Division of Voice of America ... Are you available for an interview sometime in the next two weeks? We're looking for advice from education experts, and your input would be greatly appreciated."

Hinkel gave examples of important phrases in the email:

These expressions are considered polite ways, in American English, to introduce yourself or to ask another person for something.

These phrases are socially acceptable and grammatically correct.

Anna Uhl Chamot also has studied learning strategies. She advises learners to look for patterns as they learn a language. Chamot calls this strategy "Finding and Applying Patterns."

"So, French article writing is not formulaic, German is not formulaic, in general, Central and Eastern Europeans don't do formulae. So, it (the English language) is highly formulaic in practically every way – not just the structure, but also the mode of expression."

Hinkel adds that English academic articles often begin with a statement of purpose and then uses common patterns throughout.

She gave an example of common and important phrases for introducing a topic and giving a summary in academic writing:

"This paper will discuss X, Y, and Z.

"First, it will consider A, B, and C, then it will also take a look at blah-blah-blah, and in conclusion, the paper will explain B, C and D. So, in general, these formulae are something that most learners don't notice."

The important phrases that learners don't often notice include the following: "First, it will consider ...," "then it will take a look at ...," and "in conclusion, the paper will explain ..."

There are many other common phrases in academic writing.

Three steps to improving your writing

One common problem for English learners is that they often do their writing assignments without a clear goal in mind.

For example, Hinkel says, when learners write personal narratives they may choose their subject with little planning.

"So, they (English learners) just simply say 'Alright, I'm going to write about my memory from childhood. And it was about my greatest grandfather in the world. And I love him, and he has been long dead.' "

She adds that English learners can improve their writing by planning what they want to write:

"So, that requires three things:

"Second, analyze the stinking thing to death, until you can identify this pattern. And then follow the yellow brick road."

In other words, learners should choose stories, identify patterns in the stories, and then use the patterns that they find in their own writing.

So, try to find patterns the next time you read a story on our website, 51voa.com. Then try to use the patterns that you find.

Remember, you should not copy a paper line by line. Copying a paper is considered plagiarism, and plagiarism is unacceptable in English-speaking academic work!

However, you should look for examples of pattern-like phrases in the stories. Then, try to include the phrases in your writing or speaking.

John Russell reported on this story for Learning English. George Grow was the editor.

This story has used many patterns. Can you find these patterns? Write to us in the Comments Section or on 51VOA.COM!

formulaic – adj. produced according to a formula

assertion – n. a statement about something that is given in a strong and definite way

recommendation – n. a suggestion about what should be done

plagiarism – n. the act of using another person's words or ideas without giving credit to that person