Update Required To play the media you will need to either update your browser to a recent version or update your Flash plugin.
By VOA
10 April, 2014

Today on the show: We play music from the just announced nominees for 2014 Billboard Music Awards.

But first we hear about a NASA program that connects American students with astronauts in space.

Video Links Students on Earth and Astronauts in Space

Some students in California got a rare chance to speak with astronauts in space through a recent video link. The event was part of an effort by the U.S. space agency NASA to excite young people about science.

"Station, this is Houston. Are you ready for the event?"

"And we are ready for the event."

"Station, this is Dean Emily Allen. How do you hear me?"

Astronaut Mike Hopkins is seen during a spacewalk in an image from NASA.
At the other end of the link were three astronauts floating almost 400 kilometers above the earth.

"How did you overcome your greatest obstacle on your road to becoming an astronaut?

"I went and got a master's degree, got a job as an engineer and eventually applied as an astronaut. So I think my interest in space and science, and my abilities in mathematics, had a direct relationship on how I ended up here."

Students asked a wide mix of questions. The three astronauts talked about their long work days, phone calls home and exercise in the evening. It is all done in a weightless environment. Rick Mastracchio says that often makes impossible things easy, and easy things difficult.

Engineering student Jeremy Blaire says he learned about the astronauts by observing how they behaved with each other.

"To me, it looked like they were all friends. Every time they laughed and they looked back at each other. They laughed with each other about the jokes. I never really thought about how harmonious the crew was up there."

Student Virginia Mejia learned something else: to keep trying.

"Never stop dreaming. Never, because even they said, 'I applied four times, nine times, in a period of nine years, 12 years.' Wow, they never gave up."

NASA educator Becky Kamas says one question comes up with every video link at schools around the country.

"They always ask questions about what does it take to become you? And I think the answer is, it takes passion and dedication. And every single one of these students is capable of that."

Eleven graduates of the California State University system have gone on to become NASA astronauts. A 12th might be among the students of the current graduating class.

And the Nominees Are...

Billboard Magazine has announced its nominees for the 2014 Billboard Music Awards. The group Imagine Dragons and new pop star Lorde lead all other artists in number of nominations. Christopher Cruise has more on the nominees and their music. 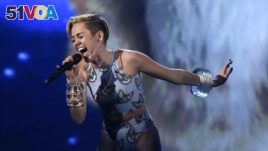 That is Imagine Dragons with "Radioactive." They are nominated for 12 awards including Top Artist and Top Duo or Group. And "Radioactive" is up for the Top Hot 100 Song award. So is this song, "Wrecking Ball" from pop singer Miley Cyrus.


"Wrecking Ball" also competes with "Royals," a song from Lorde. The singer from New Zealand also received 12 nominations. The award for Top New Artist is among them.

Beyonce is the only female artist represented in the nominations for Top Billboard Two Hundred Artist. The Top Two Hundred chart represents album sales. Beyonce released a self-titled album in December that has sold almost two million copies in the United States alone. "XO" was one of the album's hit songs.

The Billboard Music Awards will be held May 18th in Las Vegas, Nevada. We leave you with a performance by one of the nominees for Billboard Magazine's Top R&B Artist, Rihanna.
Related Articles
go top