Update Required To play the media you will need to either update your browser to a recent version or update your Flash plugin.
By Dan Friedell
12 November 2021


As worldwide temperatures continue to rise, thick sheets of ice called glaciers are going away. Some are melting, while others are evaporating.

This will hurt the people and nations that depend on glaciers. They provide water for hydroelectric power. They bring in visitors – and money from visitors. And their layers of ice keep a record of climate history. In some places, people consider the ice on top of distant mountains to be representations of spirits. 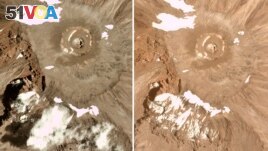 This combination of satellite images provided by Planet Labs Inc. shows glaciers at Mt. Kilimanjaro in Tanzania in 2016, left and 2021.

Richard Taylor is a professor who studies hydrogeology at University College in London. He said Uganda will have trouble if the water does not flow as usual. Uganda depends on the melting ice for hydroelectric power.

In Tanzania, Mount Kilimanjaro has lost about 90 percent of its ice. Some of the ice turns directly into water vapor and does not produce any water as it goes away.

People are worried that the lack of ice and snow on the mountain will mean fewer visitors. Tourists made up about 10 percent of Tanzania's economic output in 2019.

Rainer Prinz studies glaciers at the University of Innsbruck in Austria. He said people in Tanzania see the snow and ice on top of the mountains as "the seat of god. It has a very spiritual meaning," he said. Prinz added that the loss of glaciers might also affect the religious beliefs of the people who live near the mountain.

In Europe, on the border of Germany and Austria, less than half a square kilometer of ice remains on five glaciers combined. Scientists estimate that is an 88 percent loss compared to 1850.

Christoph Mayer is a scientist at the Bavarian Academy of Sciences and Humanities in Munich, Germany. He believes the economy will be hurt when travel companies can no longer tell visitors they can see and walk on high mountains with glaciers.

"People living around these regions really live from tourism ... there will be an impact on them if they lose these glaciers," Mayer said.

Scientists are also concerned about the loss of history as glaciers melt.

R. Dwi Susanto is an oceanographer, or ocean scientist. During a 2010 visit to the Carstensz glacier in Indonesia, he took samples from the ice. But the samples only let scientists examine climate records dating back to the 1960s.

Disappearing glaciers are also a problem in South America. Scientists are concerned that the Humboldt Glacier in Venezuela could be gone in 20 years. They are studying what is happening to the land around the glacier.

The scientists want to be able to warn other communities that still depend on large glaciers for water and power.

Lauren Vargo studies glaciers for the Antarctic Research Center in Wellington, New Zealand. She said losing glaciers will badly hurt Peru, which depends on melting ice as a water source. Peru already lost about 30 percent of its glaciers between 2000 and 2016.

Mayer, the scientist in Germany, said losing the glaciers will affect more than just the local communities. It will cause problems around the world – from higher sea levels to changes in usual weather.

He said losing the glaciers "is really a warning sign of what is coming in the future."

Dan Friedell adapted this story for Learning English based on a report by The Associated Press. Ashley Thompson was the editor.

What are some ways melting glaciers might change your life? Tell us in the Comments Section and visit 51VOA.COM.