Update Required To play the media you will need to either update your browser to a recent version or update your Flash plugin.
By Dan Friedell
15 August, 2017

An abstract painting called "Woman-Ochre" is a work of the famous Dutch-American artist William de Kooning.

The painting used to hang in The University of Arizona Museum of Art. 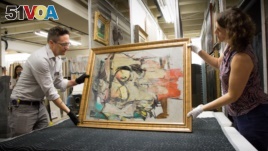 University of Arizona staff members prepare to examine Willem de Kooning's work after it was returned to the school.

That is until "Woman-Ochre" was stolen from the museum in 1985.

It had not been seen since then.

But that changed recently when a man who sells artwork and furniture visited a home in a small town in New Mexico.

David Van Auker sells old furniture and paintings in his store in Silver City, New Mexico. He was invited to a home nearby to see if there was anything he wanted to buy so he could sell it in his store.

At first, Van Auker thought he found a print of the de Kooning painting. Upon a closer look, however, he realized it was real paint on canvas.

Van Auker thought perhaps the home's former owner liked to paint and made a copy.

Eventually, he bought the painting and everything else in the home for $2,000.

When Van Auker put the painting up for sale at his store, some people said they thought it was an original.

That made him think. So he researched the painting and found a story from a newspaper in Arizona. The headline read: "De Kooning Painting Valued at More Than $100 Million Missing for 30 Years."

The painting looked exactly like the one he had in his hands.

So he called the university and told the museum he thought he had its missing painting.

After a number of telephone calls, Van Auker took photos and emailed them to the university. They were sure he had something important. So the next day, a number of people drove about three hours to Silver City.

The group borrowed the painting and brought it back to the school in Tucson. After careful study, they decided it was the original, stolen 32 years ago.

Meg Hagyard is the acting director of the museum. She thanked Van Auker for returning the painting.

She called its recovery a "monumental moment for the museum."

Van Auker said the experience of finding the lost painting was "one of the most important moments in my life."

Dan Friedell wrote this story for VOA Learning English based on a report by the University of Arizona. George Grow was the editor.

What would you do if you found a stolen painting? We want to know. Write to us in the Comments Section or on 51VOA.COM.

abstract – adj. expressing ideas and emotions by using colors and lines without attempting to create a realistic picture

canvas – n. a specially prepared piece of cloth on which a picture can be painted

headline – n. words set the top of a newspaper story

original – n. that from which a copy or reproduction is made