Update Required To play the media you will need to either update your browser to a recent version or update your Flash plugin.
By Anne Ball
22 January, 2017


Smog is a health concern in many areas, such as China's capital.

Beijing started the New Year with heavy smog hanging over the city.

The skies seemed darker than usual, resulting from the thick clouds mixing with smoke and air pollution.

Beijing residents were forced to wear protection from the heavy smog when traveling. Many people wore a mask to cover their nose and mouth. Masks help keep them from breathing the small pieces of unhealthy particulates floating in the air. 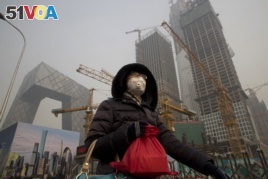 A woman wears a mask as she walks past a construction site as smog continues to choke Beijing, China, January 6, 2017.

But China's capital is not alone. Bloomberg News reports that heavy smog has forced more than 60 cities, including Beijing, to declare health alerts so far this year.

The smog has led to delays of airline flights, problems involving shipping and port operations, and school closings in the north and center of the country.

In early January, more than 2,000 people were forced to stay on a cruise ship for two days because of smog. The thick clouds prevented the ship from reaching the port of Tianjin safely, the Beijing Evening News reported.

The same week, three northern ports had to suspend loading of goods on ships for one day because air pollution made it difficult to see.

The government and environmentalists say the smog is coming from coal-burning factories and power stations.

Coal-burning power plants in both China and the United States are responsible for about 40 percent of the world's carbon emissions. Studies have linked the emissions to rising temperatures in Earth's atmosphere. The Paris Climate accords aim to slow the release of carbon dioxide and other pollutants into the air. Nearly 200 governments signed the agreements in December 2015.

In December 2016, the Chinese government released new, five-year targets for cutting its huge coal production.The plan is to reduce the coal production capacity by 800 million metric tons in 2020, the National Development and Reform Commission said.

Chinese officials are trying to restrict the use of coal in the very cold, northern parts of the country.

Across large areas of the countryside, people burn untreated coal in home stoves to stay warm. Between 1950 and 1980, coal was given to people for free. Today many Chinese still depend on it for heating.

Yao Junhua lives in Qi'nan. Here Yao is heard through a translator as he sits by his home stove filled with coal.

"I don't think burning coal for heating can cause terrible air pollution. I think it is unfair for them to blame us as the source of pollution. We burn very little coal in villages."

Environmentalists say both the large industrial plants and small stoves are responsible for China's air pollution.

Ma Jun is director of the Institute of Public and Environmental Affairs. His words are also translated here:

Recently, the government announced plans to establish a new police force. Its officers will deal with environmental crimes as part of efforts to clean up the air and punish repeat polluters.

The government has invested billions in clean energy — to cut back on the need for imported oil and gas, as well as coal. Not including large-scale hydroelectric dams, China invested $103 billion last year in wind, solar and other renewable sources, according to the United Nations Environment Program. The United States spent $44 billion.

At the same time, China has promised to build a number of new coal plants.

Some Beijing residents are angry about living in a polluted cloud.

Zhan Yan, who lives in Beijing, is heard through a translator:

"I believe we will eventually resolve the air pollution problem, but the thing is how long does it take for them to fix this? If they need a few decades, my child will live under the smog all his life and I will end my life in smog as well. If so, where is the hope? "

Some people in China might be trying to escape from the pollution, at least for a short period. Bloomberg says people there are looking to take "lung cleansing" trips to Antarctica and Iceland. It says traveler online searches for terms like "smog escape," "lung cleansing" and "forests," had tripled during the thick air pollution time.

That information comes from a report titled "Smog Escape Travel Ranking" by the Ctrip.com website. Warm islands like the Seychelles and the Maldives also made the list.

As long as coal remains the cheapest way to stay warm, China will have to continue to work for cleaner air.

Anne Ball wrote this story for Learning English with material from VOA News, Reuters, and Agence France Presse. George Grow was the editor.

emission – n. the act of producing or sending out something from a source

capacity – n. the ability to hold or contain people or things

translator – n. a person who changes words in one language to another

hydroelectric – adj. of or relating to the production of electricity by using machines powered by moving water