Low-Cost Incubator May Save More Babies

Update Required To play the media you will need to either update your browser to a recent version or update your Flash plugin.
By Jonathan Evans
18 December, 2014


Premature birth is the biggest killer of children worldwide. About one million babies around the world die of problems that strike because they are born too early. Many of these babies could have been saved if they had been placed in an incubator.

Weak or sick newborns can be cared for in an incubator for special protection and treatment until they are stronger. Yet, this costly device is mostly unavailable in developing countries. A young British researcher says he has found a solution -- a low-cost inflatable incubator.

Doctors say many expectant mothers in developing countries give birth to babies too soon, especially in refugee camps. They say the premature births happen because the mothers have poor nutrition and live in unhealthy conditions. The tiny babies are born before their lungs are fully developed. Undeveloped lungs make them more likely to develop deadly infections. If placed in an incubator, they can continue to develop in a warm, controlled environment.

However, one incubator costs about $50,000. Some hospitals in developing nations are unable to pay for the devices. 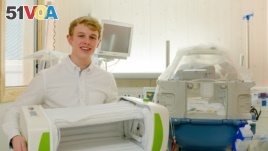 "It's basically an insulated piece of air, so it's like the difference between double and single glazing, so it's easier to keep the inside at a stable heat environment, heat temperature."

The MOM incubator is collapsible. When folded, the device looks like an ordinary travel bag. James Roberts developed the idea for the incubator after watching a documentary film on events in Syria. He says he wanted to find a way to help premature babies in developing countries.

James Roberts found a way to provide power to his incubator design. Power failures happen often in refugee camps. But a car battery can provide power for the MOM incubator. The incubator can run for 24 hours until main power sources return. 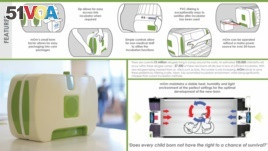 A detailed description of how the MOM incubator works

James Roberts won the $45,000 James Dyson Award earlier this year for his incubator design. Mr. Roberts says the MOM incubator project is still being developed. But he hopes the award money will help him start a company for the mass manufacturing of inflatable incubators.

collapsible – adj. able to break apart, fold or fall down

incubator – n. a piece of equipment in which very weak or sick babies are placed for special care and protection after their birth

inflatable – adj. something such as a tire or balloon that has air or gas added to make it larger

mass – adj. a large number or amount of something