Low Numbers of Tunisians Vote on a New Constitution

Update Required To play the media you will need to either update your browser to a recent version or update your Flash plugin.
By Mario Ritter Jr.
26 July 2022

It is estimated that less than one third of voters completed ballots in the referendum.

President Kais Saied dismissed parliament last year. Since then, he has governed with expanded powers gained through his own orders. Saied offered the new constitution last month. 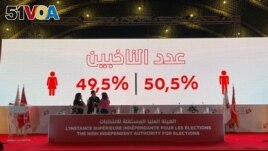 Electoral workers chat before the announcement of the preliminary results of a referendum on a new constitution, in Tunis, July 26, 2022. (REUTERS/Jihed) Abidellaoui

Opposition parties boycotted the referendum. They said the new laws destroy democracy in Tunisia which was put in place after the 2011 uprising known as the Arab Spring. Tunisia is the only country to have established a democracy as a result of the uprising.

However, Tunisia now faces an economic crisis with the public mainly concerned about financial issues. The country is seeking a $4 billion load from the International Monetary Fund, or IMF, to rescue the economy. But workers groups opposed reforms required by the IMF including the removal of price supports for food and fuel.

An opinion study by French financial company Sigma Conseil found that 92 percent of people who voted in the referendum supported the new constitution. An early report from the electoral commission said that, of those who could legally vote, only 28 percent did so.

Voter turnout is believed to have been the lowest since 2011. Official numbers for the referendum will be closely watched.

Early results are expected Wednesday with the final result being announced on August 28.

Tunisia's new constitution gives the president additional power over the government and courts. It has been described as giving the president full executive powers.

The opposition says the president's moves last year represent a seizure of power and rejected the referendum as illegal.

Western democracies have looked to Tunisia as the only success story of the Arab Spring, a pro-democracy movement that swept the Middle East in 2011. Over the past year, they have urged the country to return to the democratic path.

President Saied completed his ballot Monday and said the referendum provided the start of a new republic.

But critics warn that the new constitution could lead to the one-party rule that existed under former president Zine El Abidine Ben Ali.

Samia is a married woman in Tunis with a teenage son. She did not want to vote. "I'm frustrated by all of them," she said.

But voter Yahia Arafet said: "This was an important day. I hope all Tunisians vote to raise the country's level and improve it."

Mario Ritter Jr. adapted this story from Reuters for VOA Learning English with additional material from the Associated Press.

turnout –n. the number of people who go to or take part in something such as a vote or an event

executive –adj. responsible for making sure laws are carried out and for managing the affairs of a nation or state

referendum –n. an event in which the people of an area vote for or against a law that deals with a specific issue

frustrated –adj. angry, discouraged or upset because of being unable to do or complete something