Update Required To play the media you will need to either update your browser to a recent version or update your Flash plugin.
By Hai Do
23 August 2022


Scientists at the American space agency NASA say the average yearly temperature on Earth has risen by at least 1.1 degrees Celsius since 1880. The warming has melted glaciers and lowered river and lake levels around the world.

The warming has also uncovered many unexpected objects hidden under ice and water for many years. Such objects include a plane wreck, sunken warships, human remains and pre-historic objects.

Plane wreck in the Alps 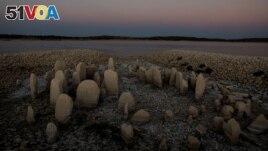 FILE - Guadalperal, also known as the Spanish Stonehenge, is seen due to the receding waters of the Valdecanas reservoir in the outskirts of El Gordo, Spain, August 3, 2022. (REUTERS/Susana Vera/File Photo)

The Alps have some of the highest mountains in Europe. This year, melting mountain glaciers uncovered some surprises in the Swiss Alps.

On August 4, Swiss officials announced they had discovered the remains of a small plane that crashed on June 30, 1968. Officials said, "At the time of the accident, more than 50 years ago, the technical means to recover aircraft wreckage in difficult terrain were limited."

Just weeks earlier, two French mountain climbers found a human body while heading down from a glacier near Zermatt. One of the climbers told the Swiss publication Blick that he suspected the individual may have been lost in the glacier for around 30 to 40 years. He said, "The clothes were neon colored and in the style of the (19)80s." The body was frozen and partly damaged, he added, "but still complete."

Weeks of hot weather this summer have lowered the water levels of many European rivers.

The dry weather has pushed one of Europe's famous rivers, the Danube, to its lowest water levels in many years. The low levels exposed more than 20 German warships that sunk during World War II near Serbia's river town of Prahovo.

In Italy, officials declared a state of emergency in late July after finding a 450-kilogram World War II bomb in the low waters of the country's Po river.

Around 3,000 people living near the northern village of Borgo Virgilio were evacuated while military experts removed the U.S.-manufactured device earlier this month.

Some discovered objects were happy surprises, however.

In Spain, the water level in Valdecanas Lake has dropped to 28 percent of capacity. There, archeologists were happy to see a prehistoric stone circle known as the "Spanish Stonehenge." The area dates back to 5000 BC. It was discovered in 1926. But the area was flooded in 1963.

Lower water levels of the Yangtze River in China have brought to the surface three Buddhist statues. They are believed to be 600 years old. Chinese state media Xinhua news agency said they were found on the highest part of the island reef called Foyeliang.

Old objects have also been found in Norway's melting glaciers in the past few years. Science Daily recently reported that archeologists found a 28-centimeter-long shoe that is more than 3,000 years old. They also found a 6,100-year-old arrow shaft.

Bodies in a lake

In the United States, federal officials announced last week that the extremely dry weather conditions will force cuts in the amount of water usage from the Colorado River. The cuts, based on the water levels at Lake Mead, affect people across seven American states and Mexico.

Since 1983, the surface of Lake Mead has dropped more than 52 meters. In May, two sets of human remains were found in the dry lake bed.

The lake is about 50 kilometers from Las Vegas, Nevada. The city is known for its gambling and organized crime operations.

Former Las Vegas Mayor Oscar Goodman once worked as a lawyer representing people involved in organized crime. "There's no telling what we'll find in Lake Mead," he told the Associated Press. "It's not a bad place to dump a body."

Hai Do wrote this story for VOA Learning English with additional reporting from Reuters and The Associated Press.

glacier - n. very large area of ice that moves slowly down a slope

expose - v. to leave something without covering

evacuate - v. to move someone from a dangerous place

style - n. a particular way in which something is done, created, or performed

shaft - n. the long narrow part of a weapon like arrow

gambling - n. the practice or activity of betting money

mayor - n. a government official who heads a city or town

dump - v. to leave or get rid of something