Lucille Ball Was The Funniest Woman on TV

Update Required To play the media you will need to either update your browser to a recent version or update your Flash plugin.
By VOA
2012-5-19


MARY TILLOTSON: This is Mary Tillotson.

STEVE EMBER: And this is Steve Ember with the VOA Special English Program PEOPLE IN AMERICA. Today, we tell about the much-loved performer Lucille Ball. Her famous television series, "I Love Lucy," was first broadcast in nineteen fifty-one. 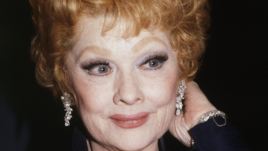 Lucille Ball
STEVE EMBER: One reason for the great popularity of "I Love Lucy" may have been its real-life connection with Miz Ball's family. On the show, she was Lucy, the wife of Ricky Ricardo, a Cuban musician. Ricky was played by band leader Desi Arnaz, who was Lucille Ball's husband in real life. The show combined issues common to the life of married people living in the city with musical performances and comic theater.

Often, a show would include a part with Mister Arnaz acting seriously while Miz Ball added a funny element. In the following piece, Mister Arnaz tries to sing normally and Miz Ball adds the comedy.

MARY TILLOTSON: Also on the "I Love Lucy" show were Vivian Vance and William Frawley. Miz Vance played Ethel Mertz and Mister Frawley played Ethel's husband, Fred Mertz. On the show, the Mertzes were friends of the Ricardos and owned the building in which they all lived.

Fred Mertz loved baseball, which was America's most popular sport at the time. "I Love Lucy" often showed Fred Mertz intensely watching baseball or some other sport like boxing while Ethel added her own funny comments.

STEVE EMBER: A well-known story about the "I Love Lucy Show" concerns the birth of the Arnaz's son, Desi Junior. Officials of the broadcasting company wondered what to do when Miz Ball became pregnant in nineteen fifty-two. Miz Ball explains that her husband, Desi, came up with a solution.

MARY TILLOTSON: Miz Ball's pregnancy was made part of the show. In fact, critics say the show in which Lucy Ricardo tells Ricky that she is pregnant is one of the best. In it, Lucy goes to the entertainment place where Ricky's band is playing to tell him that they are going to have a baby. Ricky suddenly understands that he is going to be a father after Lucy secretly requests the song, "We're Having a Baby."

The show in which Lucy gave birth was one of the most popular television programs ever broadcast in America. In fact, the story is that Desi Junior's birth replaced reports about Dwight Eisenhower's first presidential ceremony on the front pages of America's newspapers.

STEVE EMBER: The success of the "I Love Lucy" show did not come early in Lucille Ball's life, or easily. Instead, it was the result of years of hard work.

Miz Ball was born near Jamestown, New York, in nineteen eleven. She tried to get into show business at an early age. Early on, she went to the same acting school as the famous actress Bette Davis. However, she left when she was told that she did not have enough acting ability.

In the early nineteen thirties, she moved to Hollywood. She appeared in a number of movies, but was not well known.

MARY TILLOTSON: In nineteen forty, she met the leader of a musical group who had been born in Cuba. His full name was Desiderio Alberto Arnaz de Acha the Third. They worked together in a movie and married soon after they met. For the next ten years, she appeared in movies and on radio. He traveled a lot with his band.

In nineteen fifty, the broadcasting company, CBS, decided to make a television program based on the radio show, "My Favorite Husband." Lucille Ball was the star of the radio show. She wanted Mister Arnaz to play the part of her husband on the television show. CBS rejected the idea. But she refused to give up. She and Desi traveled around the country performing in a show together to prove that they would do well on television. Their show was a success. CBS offered them both jobs.

STEVE EMBER: Miz Ball had another demand. She wanted her show to be a production of the best quality. Early television pictures were not of good quality. Miz Ball wanted her program to be filmed, which would improve the picture, and then broadcast later. Yet she wanted people to watch the program as it was being filmed so the sound of their reactions could be captured.

Miz Ball also wanted to film the shows in Hollywood.  CBS did not want the extra costs. So, Miz Ball and Mister Arnaz agreed to work for less pay. In exchange, CBS let them own the program. That agreement made them owners of what would become one of the most successful programs on television.

MARY TILLOTSON: During the fifties, Miz Ball won almost every honor there was for television actors including several Emmy Awards. Yet, even the most popular performers could not escape the political realities of the time. Conservative lawmakers accused Lucille Ball of being a communist. The Federal Bureau of Investigation kept a secret record of information about her, just as it did about many Hollywood actors at the time.

In nineteen sixty, Lucille Ball and Mister Arnaz legally ended their marriage. Mister Arnaz sold his part of the company to his ex-wife.  Miz Ball became the first woman to head a major production company. It was one of the biggest in Hollywood.

Miz Ball also was the star of several other shows of her own.  "The Lucy Show" was broadcast from nineteen sixty-two to nineteen sixty-eight.  "Here's Lucy" followed until nineteen seventy-four.  Miz Ball later sold her production company to Paramount Studios.

MARY TILLOTSON: "I Love Lucy" showed Miz Ball at her best. Mister Arnaz added something that was unusual for American television at the time. Many of the songs on the show were in Spanish. One song, "Babalu," is popularly connected with "I Love Lucy". Its words are Spanish and its sound is Latin American. It is this mixture along with the excellent performances that made the show special.

STEVE EMBER: Miz Ball died in nineteen eighty-nine after a heart operation. Yet, she still makes people laugh. Her programs are rebroadcast on television and there are hundreds of Internet sites about her. After all these years, everyone still loves Lucy.

Jim Tedder: Our program about Lucille Ball was written by Mario Ritter and read by Mary Tillotson and Steve Ember. Join us again next week for PEOPLE IN AMERICA in VOA Special English.
Related Articles
go top