Update Required To play the media you will need to either update your browser to a recent version or update your Flash plugin.
By Anne Ball
05 February, 2017


Heart transplant surgery is a common medical treatment in the United States.

Some doctors are skilled at removing the heart from someone who has just died, and then preparing it for another person who needs a new heart.

Nationwide, about 4,000 new patients a year are listed for a heart transplant. But only about 2,500 are able to have the operation.

Jason Smith is a surgeon with the University of Washington Medical Center in Seattle. He notes that because of the difference in numbers, not all patients on the transplant list will live.

"Because of that disparity, we still have about 17 percent of patients who get listed for transplant, for heart transplant, who die on the waiting list."

There is a shortage of organ donors. Some people do not want to donate their organs or those of a loved one. But also, some donated organs do not make it to the surgery room in the right condition for transplant.

Once the organ is removed from the donor, there is only a short time to get the organ to the person who needs it. The average length is four to six hours. After that, the organ begins to fail. This can be a problem if the donor died far away from the recipient.

Traditionally, the donated hearts are transported in an ice box. Keeping the organ on ice has been the best way to preserve it. Medical workers sometimes carry the box on a helicopter or airplane.

Now, a new travel box contains equipment that keeps the heart beating during transport. The only time it stops beating is for a few minutes -- just before it is placed into the chest of the person receiving it.

For more than a year, the Organ Care System has been tested in the United States. The system, also known as "heart in a box," has an American manufacturer, a company called TransMedics. It is already available in Europe and Australia.

Dr. Jason Smith is pleased about the addition of transport pumps on the boxes.

"So having a transport pump to preserve the heart function allows us to better match the hearts to the recipients so that more of the hearts that are being donated can actually be used and implanted into recipients."

Ted Daniels is also pleased with the "heart in a box." He was the first patient to get a heart through the Organ Care System in the U.S. trials. Daniels, a truck driver from Washington State, received his new heart in September 2015. 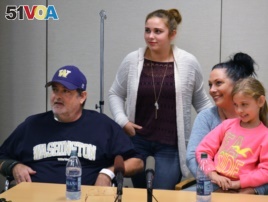 A month later he spoke to the news media. Daniels said he was "excited" to be part of the new patient technology. He said, "It makes me happy to know that I'll probably get to see my daughters (ages 16 and 7) graduate and get married."

The equipment has been tested on flights up to 11 hours long. The machine pumps donated blood through the organ, so it can work as it does inside a body.

Those traveling with the heart watch it closely to make sure it is in the best possible condition for transplantation.

The development of this new heart travel machine is good news to Kevin O'Connor. He is the head of Lifecenter Northwest, a group that organizes organ and tissue donation in some Northwestern states.

"I absolutely think it's a great opportunity to improve the preservation technology for hearts and other organs, and will only stand to benefit patients in need of replacement organs in the future."

TransMedics is also testing the technology to help preserve donated lungs and liver organs. Similar to the way that hearts are kept beating in the box, the lungs "breathe", and livers "produce bile," according to the company's website.

It adds that if an organ is beginning to fail, the machine may be able to bring it back to a fully functioning condition. That would give doctors more organs for transplantation.

Doctors say the new technology alone will not end the need for more donated hearts. They are urging Americans to register to become an organ donor.

disparity – adj. different from each other

preserve – v. to keep something its original state and good condition

recipient – n. a person who receives something

graduate – v. to earn a degree from a high school or college

bile – n. a yellow or green liquid made by the liver that helps the body digest fats

according to – adv. as stated, reported or recorded by