Update Required To play the media you will need to either update your browser to a recent version or update your Flash plugin.
By Dan Friedell
26 June 2021


MacKenzie Scott, the former wife of Amazon founder Jeff Bezos, recently donated over $2 billion to hundreds of organizations, including colleges and universities.

She is one of the wealthiest women in the world. Even with the donation, she still has over $60 billion. 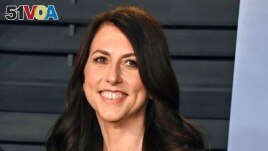 Scott wrote about her decision to donate the money on Medium.

She said she wanted to give money to organizations that can help people who are "underfunded and overlooked."

Some of the organizations support arts and culture. Many of them support local education.

For example, one organization, Achieving the Dream, works to help community college students in 45 states enter school and finish their degrees.

Another organization, Jazz at Lincoln Center, is run by Wynton Marsalis, a member of a famous musical family. Its mission is to teach people about jazz music, educate music students and "celebrate personal freedom."

However, a major part of Scott's money went to higher education, schools both large and small. For example, large universities in Florida and Texas each received $40 million. Overall, about 30 colleges and universities received money.

A number of community colleges received millions of dollars each. They are two-year schools that often serve as a bridge between high school and four-year colleges. They also teach people career skills like how to be a nurse or how to protect computer networks.

Martha Parham is a spokeswoman for the American Association of Community Colleges. The colleges her organization represents serve almost 12 million students each year. She said about 30 percent of the students are the first in their families to attend college.

Most community colleges operate with very small budgets. Money generally comes from state governments, local taxes and students paying for their classes. A large donation from someone like Scott is rare.

"Community colleges are not ‘heavy hitters' in terms of philanthropic donations," Parham said. "These donations from MacKenzie Scott are, in most cases, the largest donations these colleges have ever received."

College of the Desert is a community college near Palm Springs, California. It has about 16,000 students. Scott donated $18 million.

In a statement, the college president, Jeff Baker, said the money will go to a program that helps local high school graduates attend school without being charged for two years.

Baker said the donation will help the program stay active for many years without asking for donations. He said the program will now be "never-ending."

Parham said the donation from Scott is the second big news story of 2021 to call attention to community colleges. The other is that Jill Biden, the First Lady, is a community college professor.

"We're extremely proud of what the community colleges do, and are thrilled that they're being recognized for the role that they serve as that on-ramp to the middle class for millions of Americans."

Scott and Bezos divorced in 2019. She left the marriage owning four percent of Amazon. Her wealth increased as the value of Amazon grew.

She joined The Giving Pledge, along with Warren Buffett and Bill and Melinda Gates. They are all among the richest people in the world. They plan to give away most of their money. Since 2020, Scott has given away almost $10 billion.

Last year, she gave away about $6 billion. In that donation, she chose several colleges and universities founded by Black people with the goal of providing African-Americans with high-quality college educations. The schools are known as Historically Black Colleges and Universities.

Scott gave money to Howard University, Hampton University, Tuskegee University and many others. She also gave money to organizations that help feed hungry people and others that were helping people struggling during the COVID-19 pandemic.

Scott's most-recent gift allows the organizations to spend the money "however they choose."

Scott wrote that higher education is "a proven pathway to opportunity," and she wanted to give money to schools that help people from "chronically underserved" communities.

Dan Friedell wrote this story for Learning English. It includes information from the Associated Press. Susan Shand was the editor.

Have there been large donations to higher education where you live? Tell us in the Comments Section and visit 51VOA.COM.

nurse - n. a person who is trained to care for sick or injured people and who usually works in a hospital or doctor's office

heavy hitter –n. an important and powerful person or thing

philanthropic –n. the practice of giving money and time to help make life better for other people

on-ramp – n. a short road used to drive onto a highway; used to signify the start of a journey

chronic –adj. happening or existing frequently or most of the time