Macri called Sunday "a historic day" and said the election was "the changing of an era."

Macri lost in the first round of voting to former vice president Daniel Scioli. Scioli failed to win enough of the first-round vote. Sunday's run-off election decision was won by Macri. 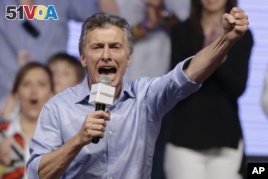 Early Monday, press reports suggested that Scioli will demand another count of the ballots.

The 56-year-old Macri has been mayor of Buenos Aires for eight years. He is the former boss of the popular football, or soccer, club Boca Juniors. He also comes from a well-known Argentine business family.

Reforming the economy will be Macri's main issue as he enters the presidency. The president-elect said he plans to reduce subsidies and move some state companies to the private sector. He said he takes a very positive view of international business.

The Argentine election comes at a time when the country's economy has stalled. Economic inflation has reached nearly 30 percent and economic growth is just above zero.

Macri's inauguration is scheduled for December 10.

What is your reaction to the Argentinian election results? We want to hear from you. Write to us in the Comments Section or visit our 51VOA.COM.

era – n. a period of time that is associated with a particular quality, event or person

boss – n. the person whose job is to tell other workers what to do

soccer – n. a game played between two teams of 11 players in which a ball is moved toward a goal usually by kicking

stall – v. to stop suddenly because of a problem

inauguration – n. to introduce someone, such as a newly elected official, into a job or position with a formal ceremony