‘Made in Vietnam’ Goods Reach Record Popularity in US Market

Update Required To play the media you will need to either update your browser to a recent version or update your Flash plugin.
By Bryan Lynn
31 March 2020


Products from Vietnam have become more popular in the United States than ever before.

U.S. imports from the Southeast Asian nation increased 36 percent last year to $67 billion, the U.S. Census Bureau reported. This represents the highest increase in a single year since 2003.

Vietnam is a major supplier of electronic products, furniture, clothing, footwear, and fish to the United States. It also is a major exporter of coffee, rice, and other foods. 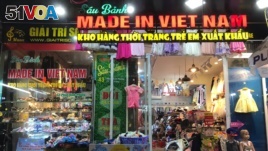 FILE - A shop in Vietnam sells "Made in Vietnam" goods.

Michael Ryan is the director of economics at IHS Markit Economics, an investment research service. He told VOA the latest increase shows Vietnam is making a "massive reorientation" in trade toward the U.S. market.

"The United States has become far and away the most important driver of Vietnam's export engine, accounting for two-thirds of Vietnam's total export growth in 2019," Ryan said.

After U.S. officials asked Vietnam buy more American goods, the country announced in March it would buy $3 billion worth of farm goods. That promise came after Vietnam said it would buy American-made airplanes.

Less than a year ago, U.S. President Donald Trump threatened Vietnam with tariffs. He accused Vietnam of abusing the trading system, but did not say how. Trump said he wants to increase U.S. exports to Vietnam to help make up for the much larger levels of imported goods.

Instead, the difference between what the U.S. imports from Vietnam compared to the U.S. exports has increased every year from 2008 to 2019, the Census Bureau found.

Jing Wu is an assistant professor of business at the Chinese University of Hong Kong. He told VOA that the trade war did not get companies to move to the United States. Instead, it caused many to move to other nations, like Vietnam, he said.

Wu and others at the university's business school studied the relationship between trade uncertainty and the movement of companies.

Their research supported the idea that many companies seek out new markets during a trade war. As examples, they named major companies including Apple, Chevron, and Victoria's Secret owner L Brands, which all have moved more business to Vietnam.

Their study was carried out before the arrival of COVID-19. The virus has greatly damaged supply chains and economic activity around the world.

But some businesses say they expect to be active in Vietnam after the crisis and continue to invest there. For example, the U.S.-ASEAN Business Council recently acted on plans to send business representatives to Vietnam.

VOA News reported on this story. Bryan Lynn adapted the report for Learning English. George Grow was the editor.

furniture – n. objects such as chairs, tables and beds that are put inside rooms or buildings

reorientation – n. the action of changing the focus or direction of something

account for – v. to be part of a total number of something

uncertainty – n. the state of not being sure about or not being able to decide something

supply chain – n. the processes involved in the production and sales of a product or products