Update Required To play the media you will need to either update your browser to a recent version or update your Flash plugin.
By Ashley Thompson
02 February 2020


Shortly before Christmas last year, Brazilian piano player Joao Carlos Martins invited his friends to a bar near his home in Sao Paolo. He wanted to show them the best gift he had received in many years: a new pair of gloves.

They are not just any gloves, however. The specially made bionic devices are letting the 79-year-old play with both hands for the first time in more than 20 years.

The artist is considered one of the greatest players of the music of Johann Sebastian Bach. 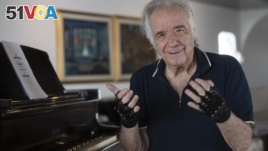 Martins retired last March. By then, he had undergone 24 medical procedures to try to reduce pain caused by a progressive disease and from a series of accidents. His limitations had forced him to work mostly as a musical conductor since the early 2000s.

But in the final days of 2019, friends returned to his home. They listened to him once again bring his favorite classical music back to life on his piano.

Before the gloves, which were especially developed for him, Martins could only play songs slowly with his thumbs and, sometimes, his pointer fingers.

He told the Associated Press,"After I lost my tools, my hands, and couldn't play the piano, it was if there was a corpse inside my chest."

Martins' health problems date back to 1965. He became known for coming back from every struggle he faced. For example, he suffered nerve damage in his arm from a soccer injury. While he was on tour, a robber hit him over the head with a metal pipe in Bulgaria.

But even his close friends believed that the latest surgery, on his left hand, would mark the end of his days as a pianist.

However, one designer believed Martins' retirement had come too early. That designer, Ubirata Bizarro Costa, created special bionic gloves for Martins' hands. The gloves help move his fingers up after they press on the piano keys.

Costa said he created early models based on images of Martins' hands. But he said those models were "far from ideal." He then decided to tell Martins about his efforts.

Costa and Martins then spent several months testing different models. The perfect match came in December, and cost only $125 to build.

These days, Martins never takes off his new gloves -- even when he goes to sleep.

He said, "I might not recover the speed of the past. I don't know what result I will get. I'm starting over as though I were an 8-year-old learning."

Martins said he has received more than 100 devices in the last 50 years as possible solutions to his hand problems. None worked well or long enough.

"But these gloves do," he said.

The new gloves have given Martins a new goal. He hopes to play the piano at New York's Carnegie Hall in October. He is already set to conduct a concert celebrating the 60th anniversary of his first appearance there.

glove - n. a covering for the hand that has separate parts for each finger

conductor - n. a person who stands in front of people while they sing or play musical instruments and directs their performance

tour - n. a series of related performances, appearances, competitions, etc., that occur at different places over a period of time

match - n. someone or something that is suited to another person or thing