Update Required To play the media you will need to either update your browser to a recent version or update your Flash plugin.
By Jim Dresbach
18 January, 2016


The American seafood staple of Maine lobster, or "lobsta" as they say in Maine, is becoming very popular on Asian dining tables.

Maine lobsters were a featured course at last year's state dinner when Chinese President Xi Jinping visited the White House. Now, the creatures with claws are becoming a big export to Asia.

The lobster's home is in the Atlantic Ocean, anywhere from Newfoundland in Canada to North Carolina in the United States. But nearly 90 percent of the fishery activity happens in the state of Maine.

And the prices for fresh lobster have risen to a higher level.

"Three years ago, the price was mediocre. We averaged around $2.50 to $3 per pound (or nearly half a kilogram) for the year," said Chris Welch, a lobster boat captain. "This year, the price has been excellent. It's better than I can remember in a lot of years." 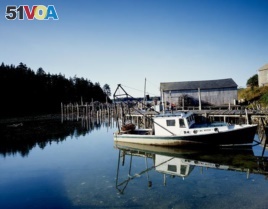 A lone lobster boat at the dock in Eastport in far northern Maine. (Carol M. Highsmith)

During one morning, a lobster order was being prepared for shipment to Hong Kong. The biggest challenge in shipping was logistics. Shippers have only 36 hours from the time lobsters are packed until arrival in China. Any lobster arriving after that time loses quality.

American shellfish exports have grown rapidly in recent years. More than 23,000 kilograms of that type of seafood is exported to Asia every week via air.

"We primarily export lobsters to Asia; probably about 80 percent to China and the other 20 percent to some other Asian countries," said lobster dealer Stephanie Nadeau.

Liu Enming and Yiyi Yang wrote this story for VOAnews. Jim Dresbach adapted it for Learning English. Kathleen Struck was the editor.

What is your favorite type of seafood? We want to hear from you. Write to us in the Comments Section or visit our 51VOA.COM.

lobster – n. an ocean animal that has a long body, a hard shell and a pair of large claws and that is caught for food

claw – n. a body part of an animal, such as a lobster or crab, that is used for gripping and holding things

fishery – n. a part of the ocean where fish and other sea creatures are caught

shellfish – n. an animal, such as a crab or an oyster, that has a hard outer shell and that lives in water