Update Required To play the media you will need to either update your browser to a recent version or update your Flash plugin.
By Jim Dresbach
25 January, 2016

At least four homes were destroyed but no injuries or deaths were reported, according to the Associated Press and the Alaska Dispatch News. 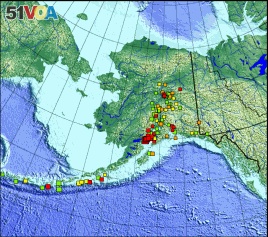 Roads and building were damaged and power was out in many areas.

A resident of Kenai, Alaska, described the early morning quake.

"It started out as a shaking, and it seemed very much like a normal earthquake," he said. "But then it started to feel like a normal swaying. It was unsettling. Some things got knocked over, but there was no damage."

Aftershocks followed the quake, including one of 4.7 magnitude felt in Anchorage and Juneau. Anchorage residents did not report any injuries or damage, according to NBC News.

According to the U.S. Geological Survey, an earthquake with a 7.1 magnitude is considered a major earthquake. These earthquakes cause damage to buildings and can be felt across long distances.

We want to hear from you. Write to us in the Comments Section or 51VOA.COM.

magnitude – n. the size or importance of something; a number that shows the power of an earthquake

swaying – v. moving or causing to move back and forth

aftershocks – n. waves of motion after an earthquake that can strike days or weeks later