Update Required To play the media you will need to either update your browser to a recent version or update your Flash plugin.
By Bryan Lynn
02 January 2022


The year 2021 was a big year for new space exploration. But next year also promises major new developments.

Here is a look at some of the biggest space missions expected to launch in 2022. 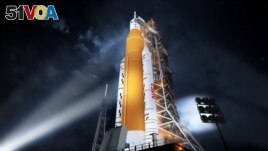 This illustration shows NASA's new rocket, the Space Launch System (SLS), in its Block 1 crew vehicle setup that will send astronauts to the Moon on the Artemis missions. (Image Credit: NASA)

The American Space Agency NASA is planning to launch the first test of its Space Launch System, or SLS, in March. NASA has called SLS "the world's most powerful rocket." It is expected to begin a new generation of human space exploration.

SLS is the first rocket designed to carry both astronauts and supplies in a single mission to the moon. It is scheduled to launch Americans back to the moon as part of NASA's Artemis program. Artemis aims to land the first woman and first person of color on the moon.

NASA's goal for landing on the moon's surface was to do so by 2024. But NASA Administrator Bill Nelson told reporters in November the target date is now 2025 at the soonest. It would be America's first visit to the moon since NASA's Apollo 17 mission in 1972.

The SLS flight in March will not include astronauts. During the test mission, NASA's Orion spacecraft will launch from the SLS rocket and travel 450,600 kilometers from Earth. NASA says this is farther than any spacecraft built for humans has ever traveled. The mission is expected to last four to six weeks.

Several nations will aim to send spacecraft to the moon in 2022.

India will seek to land a robot explorer, or rover, on the moon's surface, India Today reports. The Chandrayaan-3 mission follows an attempt in 2020 that ended with the country's lander and rover crash landing on the moon. India has said its new rover will seek to confirm the presence of water in the form of lunar ice.

The Japanese Space Agency plans to launch its Smart Lander for Investigating the Moon, or SLIM, in April 2022. The agency says the mission is designed to demonstrate lunar landing methods involving a small exploration vehicle.

Japanese space exploration company iSpace announced last April that it would transport a rover belonging to the United Arab Emirates to the moon in 2022. Japan's iSpace will provide the lander to carry the rover. The lander will launch from a Falcon 9 rocket built by American company SpaceX.

Russia is planning to launch a lunar lander in July, Russia's TASS news agency reported. The Luna 25 mission aims to land an explorer on the south polar area of the moon. The spacecraft will study materials on the lunar surface, as well as in the outermost part of the moon's atmosphere.

In November, SpaceX chief Elon Musk said his company would attempt in 2022 to launch its reusable spacecraft, Starship, into orbit. It will be the first orbital test flight for the spacecraft. Musk said SpaceX will carry out several test flights before beginning to launch satellites and other missions on Starship rockets in 2023.

NASA has an agreement with SpaceX to use Starship for transporting astronauts to the moon. Musk has said he also plans to use the rockets to land people on Mars.

A joint Russian-European mission to send a rover to Mars is expected to launch between August and October 2022. The ExoMars mission will put the rover, called Rosalind Franklin, on the surface of Mars to search for signs of possible past life. It was set to launch in 2020, but got delayed because of the coronavirus pandemic.

A NASA mission called Psyche is expected to launch in August. The Psyche spacecraft will travel three-and-a-half years to a metal asteroid orbiting the sun between Mars and Jupiter. Psyche's science instruments will gather information on the asteroid. Scientists believe it could have separated during violent crashes during the solar system's formation.

And, NASA's DART spacecraft is expected to reach the asteroid system Didymos between September 26 and October 1. The spacecraft will attempt to strike a non-threatening asteroid as a test to see how the crash affects the space object's path.

Bryan Lynn wrote this story based on reports from NASA, The Associated Press, Reuters and Agence France-Presse. Mario Ritter Jr. was the editor.

polar – adj. of or relating to a geographic pole of the area around it