Majority of US Undergraduates Are ‘Nontraditional’

Update Required To play the media you will need to either update your browser to a recent version or update your Flash plugin.
By Pete Musto
03 December, 2016


There is a commonly held belief in the United States about the best path to a college education.

Many Americans would say this path involves graduating from high school at age 17 or 18. Then, going off to university to live and study for just four years. And, at the end of that term, receiving a degree.

But, that is not as usual a path as people might think. U.S. Department of Education research suggests that the majority of undergraduate college students take a less traditional approach. 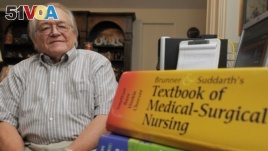 74-year-old college student Charles Buckley sits in front of his text books at his home. Buckley recieved his Bachelor of Science in nursing from the University of Southern Mississippi in 2010.

Carey Dwyer is an example. She graduated from high school in 2005 and began studying physical therapy at Temple University in Philadelphia. But, after her first year, she decided she wanted to study nursing instead.

Dwyer moved back home and began seeking an associate's degree at Montgomery College in Takoma Park, Maryland in 2006. However, medical issues forced her to take time off school. She started working full-time and going to school part-time.

Dwyer faced several difficulties. But she says nothing was as hard as returning to school after she took the time off.

In 2010, Dwyer completed her associate's degree -- also called a two year degree. She was 24. Then, she joined the Army. Using the money she earned, Dwyer completed a bachelor's degree at Fayetteville State University in North Carolina in 2015.

Now married with three children, she says she does not mind that it took her almost ten years to complete her education. In the end, she says she only put in all the effort because she wanted to.

"Ultimately, all that matters is that I got my degree done. I didn't get it for anyone else. I did it for me, specifically, to follow my goals and my aspirations."

Strayer University is a for-profit college with centers all over the country. Earlier this year, Strayer worked with the media company U.S News and World Report to create the 2016 College Experience Survey. The researchers gathered information from 1,000 U.S. undergraduate students.

The study findings showed that 70 percent of the students questioned were "nontraditional."

Information from the U.S. Department of Education suggests the nontraditional student population may be growing. In 2013 the department reported 29 percent of undergraduates were between 18 and 24 years old, studying full-time in four-year degree programs.

"Over the last 5 to 10 years we've had a more challenging labor market. So as people try to find well-paying jobs and/or move up in their organization, a college degree is becoming more and more important -- you might even say essential. And the types of programs that higher education needs to pursue, they tend to be things that are flexible in nature."

McDonnell notes that most of the students at Strayer University are nontraditional. They are often older people with years of work experience and families to raise. This means they need to be able to attend classes during the times that they are not working or caring for others, he says.

But others suggest there is more schools need to do for nontraditional students than just offering classes over the internet.

Eva Yuma is in the final year of her bachelor's degree program at the University of Maryland (UMD). She also took a long path to get where she is now.

Yuma took a year off from studies after graduating from high school. She then started seeking a degree in art history at the University of Edinburgh in Scotland in 2009. More than two years later, she found she was unhappy and moved back to the U.S. In 2013, she returned to school and became a film major.

Yuma says the most difficult part about going back to school was deciding to take on more debt to pay for her continuing education. But she also says her relationship to her school changed.

For example, she says she does not seek new friends the way she did during her first few years of higher education. Yuma says she feels more professional than the traditional students. She believes she is less afraid to speak her mind.

But Yuma argues UMD could do more to build connections between the nontraditional students. That way they could share their networks and experience.

"There isn't very much community for those students. I guess they assume that you already have an established community; you don't need the undergrad experience like the other kids do."

Yancey Gulley is an assistant professor for the higher education student affairs program at Western Carolina University. He has 15 years of experience as a college administrator. The educator says schools need to stop using the term "nontraditional." He worries that the term could harm students. It may make some feel that their schools consider them less intelligent or less hardworking.

"It really does say to them, ‘You are an exception. You shouldn't belong here. You're probably not going to be successful, but we're gonna to let you give a good old try. Good luck to you.' And that's really demonizing students [that] walk around our campuses every day and take our classes."

Gulley notes there are programs in place that are designed to support nontraditional students. For example, Fayetteville State University offers a program that opens a faster path to a nursing degree for people who already have nursing experience. The University of Maryland also works with a foundation to provide financial assistance to older students.

How do people in your country define traditional and nontraditional students? How do schools treat both? We want to hear from you. Write to us in the Comments Section or on 51VOA.COM.

graduating – v. earning a degree or diploma from a school, college or university

associate's degree - n. a degree that is given to a student who has completed two years of study at a junior college, college or university in the U.S.

bachelor's degree – n. a degree that is given to a student by a college or university, usually after four years of study

aspiration(s) – n. something that a person wants very much to achieve

demonizing – v. trying to make someone or a group of people seem bad or wrong