A miracle, it wasn't.

The U.S. Federal Trade Commission (or FTC) said the company's products, including green coffee, did not lead, as claimed, to a "tiny belly."

Also false were the emails that linked to phony news stories about the products, the FTC said. 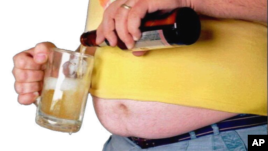 One of the stories reported, "Oprah says it's excellent," the FTC said. The idea was to make people believe Oprah Winfrey was a fan of the weight loss products, the FTC said.

Last month, the company, Sales Slash of California, agreed to pay a $10 million fine. Most of the money will go to people who bought the company's weight loss products, the FTC said.

In 2015, the FTC said it received 3.1 million consumer complaints.

Getting the most complaints were debt collectors, the FTC said.

Some complained of callers claiming to be from a government agency and threatening jail for anyone who did not pay up immediately, the FTC said.

Some tried to collect money from people who did not owe any money, the FTC said.

Second on the FTC complaint list fell under "identity theft." That is when someone claims to be someone he or she isn't.

Here is how it works: People gain a person's personal information. They use that information – like a credit card number -- to buy products in the victim's name. They also use the information to empty the victim's bank account, the FTC said.

Other times, people file fake tax returns in their victim's name. They then have tax refunds sent to their bank accounts.

"We recognize that identity theft and unlawful debt collection practices continue to cause significant harm to many consumers," said Jessica Rich. She is director of the FTC's Bureau of Consumer Protection.

As for the "miracle" weight loss products, the FTC said marketers for Sales Slash used identity fraud to convince people their products were real.

They did that by sending out emails that appeared to come from friends and family of the email recipients.

The messages urge the recipients to click links to online articles about the diet products.

"These fake news websites appear to be objective news reports about defendants' weight loss products," the FTC said in its complaint. "In fact, they are paid advertisements that advance false weight loss claims."

As usual the FTC has this advice: If an offer or product seems too good to be true, it probably is not worth your time or money.

And the FTC urges people to be careful about giving out personal information.

"Don't give your account number to anyone on the phone unless you've made the call to a company you know to be reputable," the FTC said. "If you've never done business with them before, do an online search first for reviews or complaints."

belly – n. another word for stomach

phony – adj. not true, real, or genuine -- intended to make someone think something that is not true

headline – n. the title of a newspaper, magazine or internet story

complaint – n. a statement that you are unhappy or not satisfied with something

theft – n. the act or crime of stealing