Update Required To play the media you will need to either update your browser to a recent version or update your Flash plugin.
By Faith Pirlo
17 November 2022


Have you ever seen, heard, or used these words before? 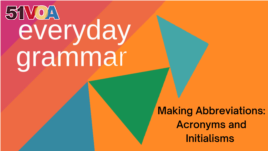 If you have, you know they are shortenings of longer expressions called abbreviations.

By the end of this report you will start to identify abbreviations and maybe even start making some of your own!

Abbreviations are shortened forms of words or phrases. They are used instead of the original words that they represent. For example, "appt." is an abbreviation for the word "appointment."

We often use abbreviations in everyday life. Like when we write the time in the United States, we use the abbreviations "a.m." and "p.m." These are short for the Latin expressions "ante meridiem" meaning before noon and "post meridiem" for after noon.

We can also use abbreviations for other time periods, also. For example, we might shorten the word for the month of "November" to "Nov." And we use them in other forms of online communication, especially in text messaging and in social media. Like "NVM" for "never mind" or "LOL" for "laugh out loud."

There are many words in English that we do not realize are actually abbreviations like "scuba" or "laser."

These are actually acronyms, and they are just one way to make abbreviations of longer phrases.

Acronyms are a type of abbreviation for a longer phrase or group of words. We use the first letter of each word to create the acronym. Acronyms are said as a whole word.

For example, we have the acronym "NASA," which stands for the National Aeronautics and Space Administration.

NASA astronaut Neil Armstrong was the first person to step on the moon.

Since acronyms are said as a whole word, sometimes we do not even know they are acronyms. This has happened with the word "scuba."

Scuba is an acronym for self-contained underwater breathing apparatus.

S stands for self.

U is for underwater.

A is for apparatus.

We do not say each individual letter. We pronounce the acronym as a whole, "scuba."

Here is an example of how we would use "scuba" in a sentence.

She wants to take scuba diving lessons before her trip to Hawaii.

Another example of this is the word "laser." A laser is a narrow beam of intense light. We also call the devices that can create such energy, lasers. But, laser is an acronym of the words light amplification by stimulated emission of radiation.

L is for light.

A stands for amplification

E is for emission

Notice that the prepositions of "by" and "of" are not included in the acronym. Such smaller words are often removed in abbreviated forms.

But not always. The international alliance ECOWAS is an example. It stands for the Economic Community of West African States. The letter "O" for "of" remains in the shortened version.

DOJ is, in fact, an initialism, which brings us to our next subject.

Initialisms are also abbreviations like acronyms, but instead of being read as a whole word, they are read as the alphabet letter or initial of each word.

For example, Voice of America is V.O.A. Each letter is read by itself.

Government agencies often go by initialisms. Another place you can see them is in the world of universities. Degrees, for example are most often represented that way. For example, if you completed a 4-year program of study in astronomy, you would earn a B.S. degree, meaning a Bachelor of Science. Other degrees include A.A. or A.S., meaning Associate of Arts or Associate of Science. Higher level degrees are called Masters.

I have my M.A. in TESOL, or teaching English to speakers of other languages.

And a Ph.D. is actually an initialism for the Latin term "philosophiae doctor" or, in English, Doctor of Philosophy.

Some abbreviations can be read as either acronyms or initialisms like in this abbreviation, A.S.A.P., or ASAP. They stand for "as soon as possible."

Please send Louise the money ASAP so she can pay the phone bill.

In today's report, we learned how to create two kinds of abbreviations. We can create abbreviations by shortening a word or phrase. If shortening a phrase, we can take the first letter of each word in the phrase and put them together to create either an acronym or an initialism.

We also learned the difference between these two. An acronym is pronounced as a whole word like the word "NASA." In an initialism, each letter is said separately like in Voice of America or V.O.A.

Now it's your turn. At the end of this lesson is a list of abbreviations.

You can write your answers in the comments or send us an email at learningenglish@voanews.com.

initial – adj. or n. occurring at the beginning of something; the first letter of a name or word

aeronautics – n. a science that deals with airplanes and flying

self-contained – adj. not requiring help or support from anyone or anything else

apparatus – n. a tool or piece of equipment used for specific activities

pronounce – v. to make the sound of (a word or letter) with your voice

amplification – n. an act, example or product of making something louder by increasing its strength

stimulated – adj. to describe making something more active or exciting to activity or growth

linguistics – n. the study of language and of the way languages work