Update Required To play the media you will need to either update your browser to a recent version or update your Flash plugin.
By Phil Dierking
15 April, 2018


Haitians are worried about changes taking place in the Little Haiti area of Miami, Florida.

Little Haiti is considered "the cultural heart of the Haitian diaspora" in the United States. Many Haitians fled from their homeland and sailed to the U.S. mainland in the 1980s. Some of them established the Little Haiti neighborhood in Florida's largest city.

Today the energetic neighborhood is filled with Haitian-owned businesses, including restaurants and stores selling works of art.

On Saturdays, music from Haiti and other Caribbean countries fills the air outside Little Haiti's Caribbean Marketplace. People buy and enjoy tasty treats from local eateries. Farther down the sidewalk, a group of girls and women in traditional Creole clothing work on dance moves. Often there are artists busy creating paintings, and performances by musicians. Today many locals are concerned about efforts to expand and develop parts of the colorful neighborhood. They note how wealthy individuals seem to be buying up property and displacing poor people. They fear that this gentrification will lead to Haitian culture and people disappearing from the area.

"Because of gentrification - it's the only thing that we have so we're trying to keep this going, said Hoppy Duroseau, who lives in Little Haiti.

Born in St. Louis du Nord, Haiti, Duroseau immigrated to the United States at age four. He is now involved with marketing for the Caribbean Marketplace on social media.

"We want to keep it busy all the time because if not - then we'll lose this place and we'll no longer have Little Haiti," he said. "Little Haiti is the only one in the world. So we need to keep this."

To slow these changes, some Haitians hope to see the Caribbean Marketplace operate seven days a week. They believe this would help support the community economically.

Over the years, the Little Haiti neighborhood has become popular with non-Haitians. Some land developers say the area is desirable because of it sits on higher ground overlooking other parts of Miami. This makes the land less susceptible to flooding and rising sea levels.

In 2016, rental prices on office space climbed as much as 50 percent. Many Haitian-owned businesses were forced to close because of the rising costs.

A local woman named Myrlande sells food at the Caribbean Marketplace. She told VOA she is among the Haitians directly affected by gentrification.

"It's a dead zone; nothing is going on. Haitians have pretty much left the neighborhood," she said. "I - myself had a business in the neighborhood and the rent went up so high that I was forced to leave... That is why we've lost almost all the Haitian-owned businesses in the community. That's why we are trying to have them open the Caribbean Marketplace every day so we can have a place to call home..." 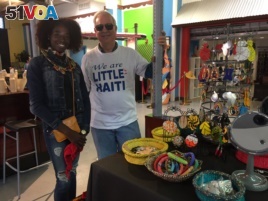 David C. Brown wrote a book called The History of Little Haiti: Featuring Its Pioneers. He says the area is special because of the values and strength of the Haitians who moved there. "...Those values that I see so clearly that shone through in the Haitian spirit are the values of family, education and work ethic," he added. "Those are the three values that have helped to raise the bar of this immigrant community."

The marketplace is home to many different vendors who each add their own personality to the neighborhood.

Roe Michel sells t-shirts and other clothing with colorful printed images. Michel immigrated to the United States from Haiti at the age of two with his parents. He feels Haitians have the ability to survive anything.

Michel shows this sense of pride through the clothes he sells. His products are called Vintage 1804. The name is based, in part, on the year Haitian slaves declared their independence from France and became the first free black nation in the Western Hemisphere.

One of his T-shirts shows heroes of the war for independence, such as Jean-Jacques Dessalines, Toussaint Louverture, and Alexandre Petion.

Often there are artists painting for the public and live music concerts.

Even with the difficulties of gentrification, Haitians like Myrlande hope the marketplace can continue to provide support to the community.

"Business today was not bad at all, but I just wish we could have the same amount of people every Saturday," Myrlande said. "Although I didn't make a lot of money today, I'm satisfied, I'm happy."

Serge Michel reported this story for VOANews. Phil Dierking adapted his report for Learning English. George Grow was the editor.

How do you think communities can prevent gentrification?? We want to hear from you. Write to us in the Comments Section or on 51VOA.COM.

ethic - n. rules of behavior based on ideas about what is morally good and bad

pride - n. a feeling that you respect yourself and deserve to be respected by other people

vendor - n. a person who sells things especially on the street

rental - n. the amount of money paid or collected as rent

susceptible - adj. easily affected, influenced, or harmed by something

diaspora - n. a group of people who live outside the area in which they had lived for a long time or in which their ancestors lived

gentrification - n. change of a place, such as an old neighborhood, by improving it and making it more appealing to people who have money