Lincoln-Douglas Debates Set the Stage for the 1860 Election

Update Required To play the media you will need to either update your browser to a recent version or update your Flash plugin.
By VOA
20 August, 2014


From VOA Learning English, this is The Making of a Nation. 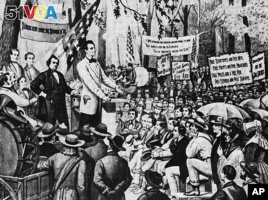 The Lincoln-Douglas debates on the extension of slavery during the 1858 campaign. (New York Public Library Picture Collection)

In the summer of 1858, Stephen Douglas and Abraham Lincoln campaigned for a Senate seat from the state of Illinois. But their debates had national importance, too.

In the Lincoln-Douglas debates, the two men discussed party politics and the future of the nation. But everything the two men debated was tied to one issue: slavery.

Douglas was a short, heavy man. One reporter said he looked like a fierce bulldog. Douglas's friends and supporters called him "the little giant."

Lincoln was just the opposite. He was very tall and thin, with long arms and legs. His clothes did not fit well. And he had a plain face, one which many thought was ugly. He looked more like a simple farmer than a candidate for the United States Senate.

Lincoln had said that the United States could not continue to permit slavery in some areas while banning it in others. He said the Union could not stand so divided. It must either permit slavery everywhere -- or nowhere.

Douglas did not agree. He noted that the country had been half-slave and half-free for 70 years. Why then, he asked, should it not continue to exist that way? The United States was a big country. What was best for one part might not be best for another.

Stephen Douglas also questioned Lincoln's statement on the Supreme Court's Dred Scott decision. Lincoln had said he opposed the decision because it did not permit black people the rights of citizenship.

Douglas said he believed the decision was correct. He said it was clear that the government had been made by white men, for white men. Douglas said each state, not the federal government, should decide what rights black people had.

And, Douglas said, the Democratic Party supported his view.

Lincoln answered that the Republican Party was not trying to force the South to end slavery. Nor, he said, did he want political and social equality between whites and blacks. But Lincoln said they both had the natural rights listed in the Declaration of Independence: the rights to life, liberty and the pursuit of happiness.

Slavery could be left alone in the South until it slowly died, Lincoln said. That way, he believed, would be best for everyone.

On election day, Lincoln won the popular vote by 4000 ballots. But because of the way election areas had been organized, the Douglas Democrats won a majority of seats in the legislature. The newly elected legislature chose him to be their senator.

Lincoln was sad that he had not won. Many people, however, did not think Abraham Lincoln would be forgotten. His campaign speeches had been published everywhere in the East. His name was becoming widely known. People began to speak of him as a presidential candidate in the election of 1860.