Update Required To play the media you will need to either update your browser to a recent version or update your Flash plugin.
By Jill Robbins
21 March, 2016


What can technology do to make your world better? Four young people are starting new businesses to answer that question. 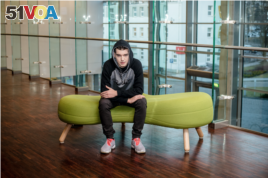 Eighteen-year-old Mateusz Mach was the youngest person in Poland to receive money from investors to expand his company. He started Five, a mobile messaging application, or app, for deaf people.

The app lets deaf people create their own hand signs to communicate with friends. The app now has more than 10,000 deaf users. And Mach thinks there will be about 150,000 more deaf users in the U.S. next year.

There are many different sign languages in various parts of the world. Mach will be working with the United Nations in New York. The U.N. offered to support the next version of Five, which is designed with the U.S. sign language in mind.

Mach will be studying economics in the next few years, but he will continue to work with new technology. He says, "I love to create. And I think that the creation of things will be my passion to the end of my life."

Ida Tin was born in Copenhagen, Denmark. She is the founder of Clue, a health company for women in Berlin, Germany.

Tin started researching choices for birth control when she was in her 20s. She had problems caused by taking birth control pills.

She learned that birth control has not changed much since the 1960s. So she decided to work on making it easier for women to plan when they have children. Another name for the use of birth control is family planning.

She made an easy-to-use app called Clue to give women information on their monthly cycles.

Clue is a menstruation and health-tracking app. It informs users when they are most or least likely to become pregnant. The app is available in 10 languages for Android, iOS and iWatch platforms. Clue already boasts more than two million users in over 180 countries.

William Zhou is the co-founder and leader of Chalk.com. The education software company helps teachers from the kindergarten level to 12th grade, or the end of secondary school.

Zhou was born in Beijing, China. He grew up in the Canadian city of Vancouver and founded his first company when he was still in high school.

Zhou sold the company when he was studying computer science at Canada's University of Waterloo. But he strongly wanted to make a change in education.

From his dorm room, Zhou created Chalk. It is a group of programs that supports individual teaching and learning. Based in Canada, Chalk is now used in 20,000 schools by more than 100,000 users worldwide.

Forbes magazine included Zhou in its list of top 30 under-30-year-old business leaders for education in 2015. Zhou says building startups is a difficult process because it could last years.

"It's only worth it if you find something you truly care about – something you're passionate about. Otherwise, you may just end up crashing."

George Mtemahanji was born in the African country of Tanzania. Mtemahanji moved with his family to Italy in 2002, where he attended the Technical Institute of Alfredo Ferrari in Maranello.

There he learned about renewable energy and began thinking that solar energy would be easier to use in Africa than in Europe.

After graduation, Mtemahanji worked as a technician for a Swiss photovoltaic company. He returned to Tanzania in 2014 to start his own solar energy company - SunSweet Solar – in partnership with his friend Manuel Rolando.

He explains that he could not understand why, in a place with bright sunshine, "more than 90 percent of people had no access to electricity. So when I returned to Italy I spoke with Manuel on the huge electricity demand in Tanzania and to the possibility to open a business there."

SunSweet Solar found early success in rural areas of Tanzania. Since then, the company has expanded to Zambia.

Mtemahanji wants to open a factory to make solar technology in Tanzania. He hopes to create jobs and help build his country in the process.

He understands the process will take time. "But I think we are on the right path."

In 2015, the team won the Anzisha Prize as one of the 12 best companies out of 500 led by young people under 22 in Africa, according to the African Leadership Academy.

Aida Akl reported this story for VOA News. Jill Robbins adapted the story for Learning English. Hai Do was the editor.

application – n. computers : a computer program that performs a particular task (such as word processing)

birth control - n. things that are done to keep a woman from becoming pregnant

family planning - n. the use of birth control to determine the number of children there will be in a family and when those children will be born

menstruate – v. to have blood flow from your body as part of a process that happens each month

found – v. to begin or create (something that is meant to last for a long time)