Update Required To play the media you will need to either update your browser to a recent version or update your Flash plugin.
By George Grow
10 October, 2014


A child rights campaigner and a child education activist will share the 2014 Nobel Peace Prize.

The Norwegian Nobel Committee announced the two winners on Friday. They are Malala Yousafzai of Pakistan and India's Kailash Satyarthi. The Nobel committee said the prize was awarded for "their struggle against the suppression of children and young people, and for the right of all children to an education." It added that the committee considers it important "for a Hindu and a Muslim, an Indian and a Pakistani, to join in a common struggle for education and against extremism."

Malala Yousafzai becomes the youngest winner of the Nobel Peace Prize. She is only 17 years old. She had been pushing for girls' education in Pakistan for several years when Taliban gunmen shot her in the head in 2012.

Doctors in Pakistan and later Britain treated Malala. She has since recovered and continues to fight for women's rights.

Kailash Satyarthi has been leading a peaceful movement to end abuse of children for financial gain. The Nobel Committee says he also has assisted in the development of important international agreements on children's rights.

The two winners will split the $1.1 million in prize money. Nobel officials will present the award on December 10th in Oslo, Norway. 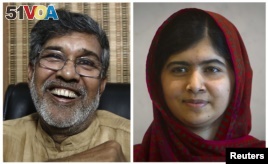 education – n. the act of teaching

struggle –n. a great effort; a fight; v. to try with much effort; to fight with

split – v. to separate into two or more parts; to divide or break into parts