Update Required To play the media you will need to either update your browser to a recent version or update your Flash plugin.
By Pete Musto
01 October, 2016


Schoolgirls in Malawi are learning to defend themselves against sexual abuse.

This is the goal of a Ujamaa Pamodzi Africa, a non-governmental organization (NGO) based in Kenya.

The group is not offering martial arts classes to the schoolgirls. But it is teaching the young women what to do if someone tries to attack them. The United Nations Children's Fund (UNICEF) has financed the program since a report about sexual assault in Malawi was released last year. 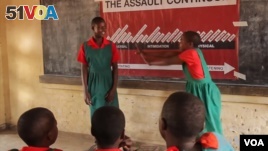 The report found that one in every five girls under the age of 18 in Malawi has been sexually assaulted.

"The curriculum involves both verbal and physical skills. With the physical skills, it's used only if it is the last and best option. So, meaning to say, we use mainly the verbal skills, which is how to use their voices to end assaults."

The schoolgirls learn to shout for help or act like they see someone coming to trick their attacker. The girls also learn ways to disable an attacker so they can run away.

The NGO has been teaching these classes for two hours every week in seven districts around Malawi.

"At the end of the year, we would like to reduce the incidences of rape. We would also like to promote education by reducing early marriages, school drop-outs and also early pregnancies."

At least 25,000 girls have been involved in the program.

Teacher Rebecca Msalanyama says before, girls were not reporting sexual attacks. But now some are feeling empowered to report incidents to teachers and parents.

One girl, named Shang Chituzu, said she has already had to use her skills.

"My uncle ordered me to lie on his bed," she said. "When I asked him why, he started touching my body. I told him to stop and that I [would] report him to the police or my mother if he [continued]. After hearing this, he ordered me out of his room."

The project is also teaching boys that they should respect girls. It also shows them how to become involved if they see a girl being assaulted.

Project organizers want to extend the self-defense program to students across Malawi. They hope there will be enough money to offer it nationwide.

Lameck Masina reported on this story for VOANews. Pete Musto adapted it for Learning English. George Grow was the editor.

We want to hear from you. What kind of programs are there that educate young people about sexual assault in your country? How can sexual assault be prevented?

martial arts – n. any one of several forms of fighting and self-defense, such as karate and judo, that are widely practiced as sports

curriculum – n. the courses that are taught by a school or college

verbal – adj. relating to or consisting of words

district(s) – n. an area or section of a country, city, or town

drop-out(s) – n. a person who stops going to a school or college before finishing

uncle – n. the brother of your father or mother or the husband of your aunt