Update Required To play the media you will need to either update your browser to a recent version or update your Flash plugin.
By VOA
27 March, 2013

Electronic medical records are not only for wealthy, industrialized countries. A test project in Southern Africa suggests that using computers to store medical information may also be a good investment in poor countries.

Electronic medical records have been used for about ten years in Malawi to follow the progress of patients with HIV. Now the program is being expanded at Queen Elizabeth Central Hospital in Blantyre. The program is called SPINE – Surveillance Program of Inpatients and Epidemiology. It has three goals. The first is collecting basic information about patients' medical problems. Dr. Miguel San Joaquin says the second goal is to look for changes in the health of all patients with HIV. 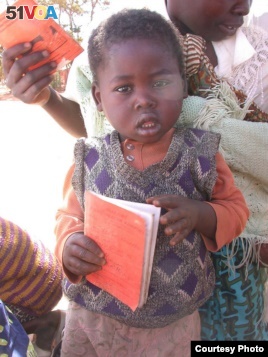 Parents and children in Malawi use health passports as a portable medical record. (Alain HY Cheng)
"For example, there are issues like how are antiretrovirals working. Are certain diseases like pneumonia going down because of the introduction of new vaccines, and so on and so forth."

Dr. San Joaquin says the third goal is to help individual patients directly. Patients receive clearly printed information when they leave the hospital so they understand how to take their medicine and what they should do next. This paper is included in a document called a health passport and replaces handwritten instructions that patients received in the past.

"Now there is a very neat and clear prescription on a piece of paper that is attached inside their health passport for their benefit."

The electronic information also gives health officials new tools to deal with outbreaks of disease or other health emergencies.

There are some challenges that make it difficult to use electronic medical records more widely. Dr. San Joaquin says it takes time to put information into a computer. Electricity often fails and so do computers. It also costs about $200,000 to start an electronic records program. For the hospital in Malawi, those costs were covered by donations from Europe.

The United Nations Global Strategy for Women and Children's Health has a goal of saving the lives of 16 million mothers and children in 75 target countries by 2015. All of these target countries have been directed to include electronic records and other information technology in their national health care systems.
Related Articles
go top