Update Required To play the media you will need to either update your browser to a recent version or update your Flash plugin.
By Lucija Millonig
28 March, 2018


Malaysia's Parliament has passed a disputed bill to change the borders of electoral areas.

Prime Minister Najib Razak called for the change to reform the voting areas. Critics say the new plan divides constituencies by ethnicity and weakens the voting power of the opposition.

They argue that the changes would unfairly help Najib's ruling National Front coalition win the general election later this year. The party faces its most difficult election in years. 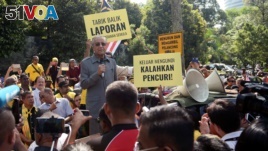 Hundreds of demonstrators protested in the capital, Kuala Lumpur, before lawmakers voted on the measure. The activists wore yellow clothing, representing the opposition. They marched toward the Parliament building but police stopped them before they reached its gates.

constituency - n. the people who live and vote in an area

gate - n. a place in a wall or a fence that has a movable part which can be opened or closed like a door