Update Required To play the media you will need to either update your browser to a recent version or update your Flash plugin.
By Susan Shand
14 March, 2019


Malaysia's attorney-general ordered the continuation of the murder case against a Vietnamese woman accused of killing the half-brother of North Korean leader Kim Jong Un.

Prosecutor Iskandar Ahmad did not explain the decision to continue the trial of Doan Thi Huong. She is now the only person on trial for the murder, following the decision earlier this week to drop charges against an Indonesian woman, Siti Aisyah. 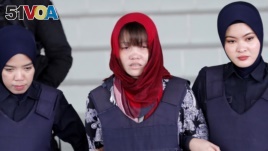 Huong's lawyer and Vietnam's ambassador to Malaysia both criticized the decision. They had hoped the charges would also be dropped for Huong.

Ambassador Le Quy Quynh said he was "very disappointed" with the decision. He said Vietnam's justice minister had written to Malaysia's chief attorney asking for Huong's release. He added that Vietnam would continue to ask for her release.

Huong's lawyer, Hisyam Teh Poh Teik, told the court that the decision was "perverse." He said government lawyers were being unfair to Huong, because her case was similar to Aisyah's situation.

Teh said, "Very obviously, there is discrimination."

Both Huong and Aisyah were accused of putting a poisonous nerve agent on Kim Jong Nam's face at the Kuala Lumpur airport on February 13, 2017.

Both women have said they thought they were taking part in a prank for a television show. They were the only people arrested for the crime, after four North Korean suspects fled the country the same morning Kim was killed.

Both women were charged separately, but the charge against them is the same -- that they worked with the four North Korean suspects to murder Kim.

Last August, a High Court judge found there was enough evidence to show that Aisyah, Huong and the four North Koreans had worked together on a plan to kill Kim.

Lawyers for both women argued that they were pawns in a political assassination with clear links to the North Korean Embassy in Kuala Lumpur. They also said that government lawyers failed to prove that the women had aimed to kill Kim. Under Malaysian law, intent to kill is critical to a murder charge.

Huong's lawyer had sought a delay for the trial Thursday. Teh said Huong was unwell and needed medical treatment. He said Huong only slept one hour each night since Aisyah's release. He added she was not in a position to answer questions from both sides.

When the judge asked Huong if she was unwell, Huong said she was suffering from tension and stress.

"I have no idea what is going on," Huong said in the courtroom Thursday.

The judge agreed to delay the trial until April 1, but warned there should not be any more delays after that. The defense part of the trial was to have started Monday.

In Huong's village in Vietnam, her family was extremely sad and disappointed.

"I had hoped for good news today, but...there is none...I had hoped my daughter would be freed like the Indonesian woman," said her father, Doan Van Thanh.

Huong could face a death sentence if she is found guilty of the charges.

Another lawyer for Huong urged Malaysia's attorney-general to explain why he dropped the case against Aisyah but not Huong.

During the prosecution part of the trial, expert witnesses said that poisoning caused Kim's death. The nerve agent was found on his face, in his eyes and on his clothes. It was also found on the women's clothes.

Experts have said the case against Aisyah appeared weaker since there was no video evidence of her with Kim at the airport. There was security camera video of Huong with Kim.

The defense part of the trial is expected to discuss the role of the four North Koreans, who fled the country and are believed to now be home in Pyongyang.

perverse – adj. wrong or different in a way that others feel is strange or offensive

prank – n. a trick that is done to someone usually as a joke

stress – n. something that causes strong feelings of worry or anxiety