Update Required To play the media you will need to either update your browser to a recent version or update your Flash plugin.
By Anna Matteo
17 September 2021


Even with an injured leg, a tall, grey crowned crane struts through a bird shelter in the Rwandan capital Kigali.

The shelter -- called Umusambi Village -- has rescued more than 200 cranes from captivity. In just four years, the organization has helped to increase the population of these endangered birds from 487 to 881.

Before this work began, local communities were hunting or capturing the birds to sell, said veterinarian Olivier Nsengimana. 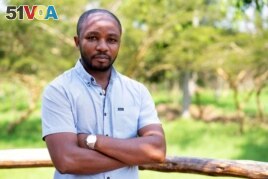 Nsengimana recently explained to the Reuters news agency why this was possibly happening. In Rwanda, the bird is often a symbol of high social status and wealth. So, they are often kept as pets in private homes or hotels.

"Many people really love cranes. But some people wanted to have them in their gardens. So, there was huge demand for the illegal pet trade," Nsengimana added.

In fact, six years ago, he said there more cranes living in captivity in hotels and homes than in the wild.

Nsengimana added that poverty and a lack of awareness in the local communities led them to capture and sell the birds illegally. He said raising awareness of their endangered status is helping to protect the birds.

Cranes are beautiful birds. The grey crowned crane is covered with grey and white feathers. Their heads are crowned by thin, yellow feathers. They have black and red features at the throat.

For Nsengimana, his own love of the bird goes back to his childhood. He grew up in a village filled with grey crowned cranes. They not only woke up people in the morning, but they also provided entertainment.

"People really enjoyed their dance ... their call. It (is) just one species that means a lot in the society ... in the culture," he said.

Nsengimana founded the Umusambi village in 2015, and runs it together with the government. Umusambi means "grey crowned bird" in the Kinyarwanda language.

Some of the rescued birds are brought to the village after being injured by illegal hunters. Others come from homes where their captors broke their legs or cut their wings to prevent them from flying away.

At Umusambi Village, the cranes are able to heal. When they are healthy enough to survive in their natural environment, Nsengimana releases them in a protected forest.

However, the cranes are still endangered by illegal hunting and by the destruction of their natural environment. This is happening not only in Rwanda, he said. Cranes are endangered in many other parts of the world, including North America.

Cedric Karemangingo and Lisa Ntungicimpaye reported this story from Kigali, Rwanda for Reuters. Anna Matteo adapted this story for VOA Learning English. Susan Shand was the editor for VOA.

crown/crowned – v. to cover or be situated on the top of

strut – v. to walk in a confident and proud way

captivity – n. the state of being kept in a place (such as a prison or a cage) and not being able to leave or be free

veterinarian – n. a person who is trained to give medical care and treatment to animals : an animal doctor

status – n. position or rank of a person or thing

awareness – n. knowledge and understanding that something is happening or exists