Update Required To play the media you will need to either update your browser to a recent version or update your Flash plugin.
By Anna Matteo
08 November, 2018

Are you unhappy with your age? Do you feel younger than your age? Well, perhaps you should consider legally changing your birth year.

That is what a Dutch man is trying to do. 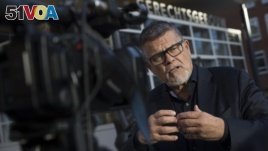 Emile Ratelband is a television host. He works as an expert in "positivity." But he says that his age is having a negative effect on his ability to find work and love.

So, Ratelband went to court to get his birth year legally changed from 1949 to 1969. He told the court that he did not feel comfortable with his age. He said he self-identified as 20 years younger.

Ratelband says he wants to avoid age discrimination in society. He says that when he asks for a mortgage, "they say it's impossible."

He complains that when he tries to get dates on a dating site called Tinder, he only gets women his age, in their late 60s. He says that with his youthful face and an age of 49, he would get more dates, possibly with younger women.

He told the Associated Press on Thursday, "With this free(dom) of choice, choice of name, freeness of gender, I want to have my own age. I want to control myself."

Marjolein van den Brink specializes in human rights and gender issues at Utrecht University. She said, "It's quite clear that elderly people have a much smaller chance of getting a job than younger people."

However, she says that age is different from the issues involved in reassigning gender. Age discrimination, she says, happens only at certain points in your career, usually between 40, 50 or 60 years of age.

"Whereas gender is something that follows you from birth to grave, " she said.

Ratelband says the Dutch government could benefit if it were to accept his age demand. He says he would be happy to give up his monthly pension of around $1,370. That would be a savings of $343,000 over the 20 years for the government.

The court in the city of Arnhem is expected to issue a ruling in about four weeks.

And that's What Trending Today.

Anna Matteo adapted this story based on an Associated Press report. Hai Do was the editor.

mortgage - n. a legal agreement in which a person borrows money to buy a property and pays back over a period of years

pension - n. amount of money that a company or government pays to a person who is old and no longer works