Update Required To play the media you will need to either update your browser to a recent version or update your Flash plugin.
By Anna Matteo
11 December 2020


It is the stuff of childhood stories – finding buried treasure! For one man, that is now a reality.

On December 7, the family of a man who buried a treasure in the southwest part of the United States confirmed the identity of its finder. 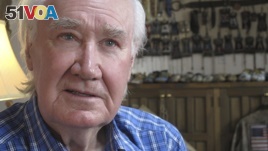 FILE - In this March 22, 2013, file photo, Forrest Fenn sits in his home in Santa Fe, N.M. A grandson of Forrest Fenn has confirmed the identity of a medical school student from Michigan reported to have found a treasure chest from the retired art and antiquities dealer.

On a website made for the treasure hunt, Shiloh Forrest Old wrote that Jonathan "Jack" Stuef found the treasure worth more than $1 million.

"We wish Jack the best of luck," Old wrote and we hope that the searching community will treat him with the respect that he deserves."

Shiloh Forrest Old is a grandson of Forrest Fenn, the man who buried the treasure.

Also, on December 7, the website Outside Magazine also published an article confirming Stuef as the finder.

Stuef is a 32-year-old medical student from the state of Michigan who found the treasure back in June. However, at that time his name was not made public.

On June 6, Forrest Fenn announced that his treasure had been found, but did not say who found it or where. Finally, in July he confirmed that the treasure was found in Wyoming. This is the only detail that is publicly known about its location.

In the beginning, Jack Stuef did not want his name to be known. In September, he wrote an article for the website Medium. He described finding the treasure, but not how or where. And he did not give his name.

Then in another more recent article published in December on Medium, he explained why. He wrote that he did not want his family to suffer the same as the Fenn family has with such things as death threats and home invasions.

So, why bury a treasure?

Forrest Fenn was a retired art and antique salesman. He was also an honored U.S. Air Force fighter pilot during the Vietnam War.

As VOA reported last year, in 1988 doctors found cancer in Fenn's body and told him he only had about six months to live. So, he decided to have fun with some of his money. He put pieces of gold, jewels and other valuables in a metal box and planned to leave it for others to enjoy after he was gone.

But Fenn beat the cancer. In 2010, he decided to hide the box. "I wanted to give people hope and something to look forward to," he said. "Maybe there is a pot of gold at the end of your rainbow if you go out and look for it."

He wanted it to be a good, traditional treasure hunt. So, he left clues to the location of the treasure in a poem he wrote in his book titled "The Thrill of the Chase."

The poem inspired many to go treasure hunting. And sometimes this led to some dangerous situations. In fact, at least four people died searching for the treasure and many others needed to be rescued. The Rocky Mountain backcountry can be very dangerous.

However, Fenn said repeatedly that the treasure was not in a dangerous or especially hard-to-reach place.

In his September Medium article, Jack Stuef describes finally meeting Fenn after finding the treasure. He brought it for the two to enjoy together. Fenn died in September at age 90 without ever identifying the finder.

Mead Gruver reported this story for the Associated Press. Anna Matteo adapted it for VOA Learning English. Susan Shand was the editor.

stuff – n. informal —used to speak in a general way about something that is talked about, written about, etc.

deserve – v. to have earned because of some act or quality

clue – n. something that guides through an intricate procedure or maze of difficulties specifically : a piece of evidence that leads one toward the solution of a problem

rainbow – n. a curved line of different colors that sometimes appears in the sky when the sun shines through rain

thrill – n. a feeling of great excitement or happiness : a very exciting or enjoyable event or experience