Update Required To play the media you will need to either update your browser to a recent version or update your Flash plugin.
By Anna Matteo
03 August 2020

The coronavirus pandemic has changed many things about everyday life. One big change is childcare – or the lack of it.

As many childcare providers closed as part of public safety measures, so did schools, offices and businesses. Social restrictions also tightened. This meant many older adults were unable to help watch or care for their grandchildren. 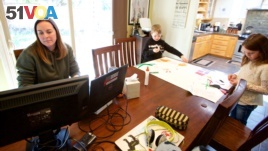 In this March 17, 2020 photo from Beaverton, Oregon, Kim Borton works from home while her children Logan, center, age 6 and Katie, age 7, as they work on an art project.

This left working parents with a sudden, unexpected problem -- working from home with children who also had schoolwork to do.

Many parents struggled to meet work demands while watching over their child's online studies at the same time. Even companies whose job it is to prepare for a pandemic were caught off guard – or unprepared.

The British drug-maker AstraZeneca spent years preparing for a health crisis. However, when it happened, the company was not prepared to help its employees work effectively at home with their children. The company asked its 8,300 employees about childcare and found that at least 1,100 needed help.

Fiona Cicconi heads the company's human resources office. She noted that some employees said they were feeling worried about the work they had to do and about not getting it done.

Several of those working parents are also responsible for trying to produce a vaccine for the disease COVID-19.

So, AstraZeneca did many things to help its employees by helping their children. The company found about 80 teachers and paid them to organize classes online. It developed a computer software program to make planning the lessons easy. And it also found tutors for children needing one-on-one instruction.

Other businesses around the world did similar things to help their employees work through the coronavirus health crisis.

In Italy, tire maker Pirelli teamed up with Radiomamma.it to provide online education and fun activities for children. Classes in English, creativity and technology are among the most popular.

However, not all parents have such support from their employer. Many are dealing with their own work, childcare and online learning on their own. I spoke with one woman about her ways of dealing with the situation.

Mary Shelley is a director of information technology at the University of Maryland, just outside Washington, D.C. She says when her son's learning went online, she needed strategies to manage her 13-year-old son's education.

During the spring, Shelley says, it seemed easy to keep her son thinking about schoolwork. At that time, nearly all U.S. students were at home and taking classes online. But now during the summer, her son is taking an online pre-Algebra class. However, the methods she used during the regular school year are still helping her now.

Get up early and get organized.

Shelley says the most important thing for her is this: wake up early and get herself organized first.

"I try to get up early and get myself organized for the day ... and figure out what's critical to get done for myself and my own work."

Having a routine is important. A routine gives you set times for the things you need to do, such as waking, studying, taking breaks, eating and exercising.

Create the routine with your child.

When making that routine involve your child. Ask for the child's help. Let them give input, or ideas. This can help a child feel empowered.

Shelley did this and says it gave her son ownership of the process. A child may be more willing to follow a routine if they helped to make it, or as our busy working mom says, "craft" it.

"I worked with him to try to craft a routine together to make sure that he has input on that as well. And I think that has helped him to take ownership of his work and of his day."

Be ready to change your routine.

After you set a routine, see how it works with your family. And be ready to change things.

Shelley describes her process as trial-and-error. She tried some things with her son to see what worked.

At first, the rule was her son had to finish all his schoolwork before playing any video games. But she found that he works better if his work is broken up into two smaller learning periods, instead of one big, long one. The one consistent thing, she adds, all work is done by dinner.

"The only thing that has been totally consistent is to everything done before dinner, and so that leaves his evening free and leaves us free from hassling him in the evenings."

This helps Mary Shelley keep a balance between home life and work life. Experts say this balance is important as many of us continue to work from home.

Experts also say that business leaders' positions toward working from home could help lead to higher productivity and loyalty.

However, they also say that working from home also can present challenges. When work and home are living so close together, parents must set boundaries. They must know when to clock out and leave their work for the day.

Anna Matteo wrote this story for Learning English with additional reporting from Reuters.

grandchildren – n. the child of one's son or daughter

strategy – n. a careful plan or method for achieving a particular goal usually over a long period of time : the skill of making or carrying out plans to achieve a goal

craft – v. to make or produce (something) with care or skill

input – n. advice or opinions that help someone make a decision

trial-and-error – n. a finding out of the best way to reach a desired result or a correct solution by trying out one or more ways or means and by noting and eliminating errors or causes of failure

hassle – v. to bother or annoy (someone) constantly or repeatedly