Update Required To play the media you will need to either update your browser to a recent version or update your Flash plugin.
By Susan Shand
06 December, 2018


It is not easy to excite New Yorkers. This is one reason why actors and other famous people move to the city. They can live quieter lives and escape the paparazzi photographers who would follow them in Hollywood.

But New York has a new media star. And this star is not living so quietly.

The star is a colorful Mandarin duck. The bird first appeared this month in a small body of water in Manhattan's Central Park.

Large crowds have gathered to see the duck. Reporters have been following its every move. The media attention on the duck has earned the name "quackarazzi" – a word combination of paparazzi and the sound a duck makes!

The duck has chosen to live in a costly part of New York -- just off Fifth Avenue, near the historic Plaza Hotel. There, hundreds of people turn up every day, hoping to see the bird show off its extremely colorful feathers.

Many people like the duck because its colors are like "sunsets," says New Yorker Joe Amato. He comes to the park nearly every day with his camera equipment.

Bird lovers have been keeping record of the bird's daily life through social media postings and videos. People have noted how effortlessly the duck moves through the water. Newspaper writers have reported on its clashes with the common New York ducks.

This week, New York's newest celebrity seemed to enjoy its fame, showing off its wings while members of the "quackarazzi" pushed each other to get a closer look.

Leesa Beckmann traveled over two hours from her home in New Jersey to see the duck. She says her 90-year-old mother has been talking all about the duck since its first appearance.

"I've got to see this...duck," Beckmann told her mother. She plans to take pictures and give them to her mother.

Bird expert Paul Sweet heads a large collection of bird species at the New York-based American Museum of Natural History. He says there is nothing special about a Mandarin duck in Central Park. Central Park Zoo has its own Mandarin duck, he says. These ducks are often imported to the United States from Asia for use on private property. 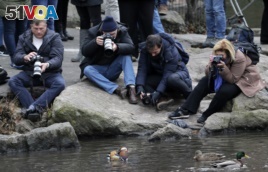 People try to get pictures of a Mandarin duck, center, in Central Park in New York, Wednesday, Dec. 5, 2018. In the weeks since it appeared in Central Park, the duck has become a celebrity. (AP Photo/Seth Wenig)

Sometimes they escape, he said. Sweet said he believes this duck is an escapee. If it were wild, he added, traditional bird watchers -- often called birders -- would be "very excited." And they are not.

"A lot of non-birders tend to see (colorful) birds as more beautiful," Sweet said. "But to me, it's no more beautiful than, say, a sparrow."

In this case, though, common New Yorkers get to decide what is beautiful. And they have clearly chosen this Mandarin duck.

paparazzi – n. photographers who follows famous people in order to take their pictures and then sells the pictures to newspapers or magazines

feather – n. the light growths that make up the outer covering of the body of a bird

sparrow – n. a common type of small bird that usually has brown or gray feathers