Remembering Nelson Mandela Around the World

Update Required To play the media you will need to either update your browser to a recent version or update your Flash plugin.
By VOA
06 December, 2013

People around the world are remembering Nelson Mandela, South Africa's first black president. He died Thursday at the age of 95.

South African President Jacob Zuma said the nation "has lost its greatest son, and our people have lost a father."

Mandela had been in poor health for several years. He was repeatedly treated in hospitals, most recently for a lung infection. He became infected with tuberculosis many years ago while in prison.

Nelson Mandela was the main leader in efforts to end white minority rule in South Africa. He spent 27 years in prison for his part in fighting apartheid -- the nation's policy of discrimination against blacks.

Many world leaders, past and present, are remembering Nelson Mandela. 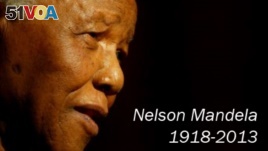 Nelson Mandela 1918-2013
Frederick W. de Klerk was South Africa's last apartheid leader. He freed Mandela from prison in 1990. Later, the two men won the Nobel Peace Prize. Mr. de Klerk said people will remember Mandela for the importance he placed on reconciliation -- being able to reach a settlement between conflicting sides. He said their relationship was, in his words, "often stormy," but he said they were "always able to come together at critical moments."

South African Archbishop Desmond Tutu was active in the struggle to end apartheid. He also was a friend of Nelson Mandela. He praised Mandela for his actions and statements after he was released from prison. Archbishop Tutu said instead of "calling for his pound of flesh, he proclaimed the message of forgiveness and reconciliation."

In the United States, President Barack Obama called Mandela an influential, brave and profoundly good human being. Mr. Obama said Mandela will be remembered for leaving a free South Africa at peace.

"I am one of the countless millions who drew inspiration from Nelson Mandela's life. My very first political action -- the first thing I ever did that involved an issue, or a policy, or politics -- was a protest against apartheid. I would study his words and his writings. The day he was released from prison gave me a sense of what human beings can do when they're guided by their hopes and not by their fears."

President Obama said flags at the White House and other government buildings will be lowered through Monday in honor of Nelson Mandela. Few foreign leaders are honored by the United States in this way.

In London, British Prime Minister David Cameron called Mandela a true global hero. In his words, a great light has gone out in the world.

Israeli Prime Minister Benjamin Netanyahu called Mandela, "one of the most honorable figures of our time." Palestinian President Mahmoud Abbas called him "a symbol of freedom from colonialism and occupation." He called Mr. Mandela's death "a great loss."