Many Americans Believe Terrorists Are Winning


A new public opinion survey shows many Americans are not satisfied with the government's efforts to fight terrorism.

Forty percent of those asked said they believe terrorists are winning their fight against the United States.

The study by CNN and the Opinion Research Corporation was released on Monday, weeks after deadly terrorist attacks in Paris and San Bernardino, California. 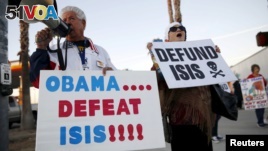 Almost three-quarters of those asked criticized efforts by the administration of President Barack Obama to fight terrorists. In 2007, 61 percent of those asked were critical of the anti-terror efforts of then-President George W. Bush. Obama is a Democrat. Bush is a Republican.

The survey showed 55 percent of members of the Republican party believe Islamist militants are winning. Fifty-two percent of Democrats believe neither side is winning.

ORC spoke to 1,018 adult Americans in the middle of December. Almost all of them were registered voters.

Forty-nine percent of those asked said they support sending American troops to fight Islamic State militants who now control large parts of Syria and northern and western Iraq. In the days after the attack in San Bernardino, a similar study showed 53 percent support for sending ground troops to fight the terrorists.

Americans disagree about what to call the strikes. Fifty-seven percent said the country is involved in a "military conflict." Forty percent said it should be called a "war." This level of disagreement is almost exactly the same as in September 2014.

Several recent public opinion polls have shown that Americans are more worried about security than the economy.

VOANews.com reported this story. We also used reporting by CNN. Christopher Jones-Cruise adapted it into VOA Learning English. Kathleen Struck was the editor.