Many Amish in America Unsure About Vaccination

Update Required To play the media you will need to either update your browser to a recent version or update your Flash plugin.
By John Russell
04 July 2021


Almost 180 million Americans — about 54 percent of the population — have received at least one dose of COVID-19 vaccine. Experts say low vaccination rates could permit the virus to become stronger and spread easily again.

Trust and use of the vaccine is less common in rural areas of the United States, especially among Amish people. They are deeply religious Christians who reject much of modern life. One large community of Amish lives in Lancaster, Pennsylvania.

When state health care leaders began planning COVID-19 vaccine campaigns, they knew it would be a difficult to persuade the Amish to accept vaccination.

Early on, health care workers placed vaccine information at farm supply stores and at places where the Amish sell their goods. They also advertised the vaccine in a newspaper widely read by the Amish.

By May, two rural vaccination centers had opened near the Amish in Lancaster. During the first six weeks, 400 people showed up for shots. Only 12 were Amish.

Vaccination efforts are far behind in many Amish communities across the U.S.

Nearly two-thirds of the estimated 345,000 Amish in the U.S live in Indiana, Pennsylvania and Ohio. In Ohio's Holmes County, home to the nation's largest Amish community, just 14 percent of the county's overall population is fully vaccinated.

Though vaccine acceptance differs among communities, the Amish often depend on family tradition and advice from clergy. A main belief of their religion is that God controls sickness and death.

Alice Yoder is the director of community health at Penn Medicine Lancaster General Health, a medical network in Pennsylvania. She says many Amish do not think they need the COVID-19 vaccine because they have already gotten sick. They believe their communities are now protected from the disease. 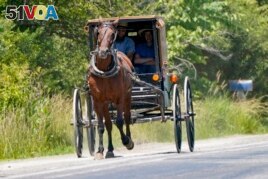 FILE In this photo made on Wednesday, June 23, 2021, a horse drawn buggy is driven down the road near Amish farms in Pulaski, Pa. (AP Photo/Keith Srakocic)

Experts say the low vaccination rates are a result of both the nature of the Amish and the general vaccine disinterest found in much of rural America.

Public health officials have tried to fight the misinformation and disinterest.

Michael Derr is the chief of public health in Holmes County, Ohio.

"It's not due to lack of effort," Derr said. "But this thing is so politically charged."

Most experts advise that people get vaccinated even if they have had COVID-19. Researchers believe the vaccine increases protection against the coronavirus.

Steven Nolt is a history and religion professor at the Young Center for Anabaptist and Pietist Studies at Elizabethtown College in Pennsylvania.

Nolt said that during the first months of the pandemic, the Amish followed social distancing guidelines. They stopped gathering for religious services and funerals.

But when non-Amish neighbors and local politicians began to protest government guidelines, the Amish began to gather again. Nolt noted that a sudden and sharp increase of COVID-19 followed in the summer.

Most Amish now say they have already had the virus and do not see a need to get vaccinated, said Mark Raber. Raber is Amish and lives in Daviess County, Indiana, which has one of the state's lowest vaccination rates.

Raber said about the vaccine, "As long as everything stays the same, I don't think I'll get it."

John Seewer reported on this story for the Associated Press. John Russell adapted it for Learning English. Caty Weaver was the editor.

pandemic -- n. medical: an occurrence in which a disease spreads very quickly and affects a large number of people over a wide area or throughout the world

due to -- expression because of (something)