Many Companies Suspending Business Trips Because of Coronavirus

Update Required To play the media you will need to either update your browser to a recent version or update your Flash plugin.
By Susan Shand
05 March 2020


Big companies are trying to keep their employees healthy by banning business trips. The decision, however, has been a hard blow to the travel industry, which has already been suffering because of the effects of the new coronavirus.

Amazon, the American-based online business, has told its nearly 800,000 workers to postpone any unnecessary travel within the United States or around the world. 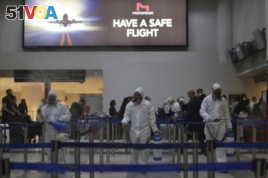 Workers wearing protective gear spray disinfectant as a precaution against the coronavirus outbreak, in the departure terminal at the Rafik Hariri International Airport, in Beirut, Lebanon, Thursday, March 5, 2020.

France's L'Oréal, maker of beauty products, employs 86,000 people. It has announced a travel ban until March 31.

Major business gatherings, like the Mobile World Congress in Barcelona, have also been canceled.

On Tuesday, Facebook confirmed it will not attend the South by Southwest conference in Austin, Texas. The event is supposed to start on March 13.

In addition, the International Monetary Fund and the World Bank have announced they will replace their spring meetings in Washington with an online event.

Robin Ottaway is president of Brooklyn Brewery. He canceled a trip to Seoul and Tokyo last week. He has suspended all travel to Asia and canceled a planned trip this month to Copenhagen.

"I wasn't worried about getting sick. I'm a healthy 46-year-old man," Ottaway said. "My only worry was getting stuck in Asia or quarantined after returning to the U.S. And I'd hate to be a spreader of the virus."

The cancellations and travel restrictions are hurting the travel industry. Business travel makes up around 26 percent of the total travel spending, or around $1.5 trillion per year, notes the Global Business Travel Association.

The association estimates the virus is costing the business travel industry $47 billion per month.

"It's a big deal," said Henry Harteveldt, a travel industry expert. He estimates that airline companies get 55 percent of their money from business travelers because they often sit in pricier business or first-class seats.

Numbers from the Airlines Reporting Corporation show that airline ticket sales fell about 9 percent in late February, compared with a year earlier.

Hotel operators are also worried about decreases in business travel. In the United States, hotels are expected to earn $46 billion from business travel this year, said the travel research service Phocuswright. No one believes that is possible now.

In the week through February 22, hotel occupancy rates in San Francisco were down 11 percent, noted STR, a company that researches hotel usage. Several major companies pulled out of the city's cybersecurity conference, which began in February.

Some observers say it is wise for companies to postpone or cancel travel before things get worse. Worldwide, the coronavirus has sickened over 90,000 people. More than 3,000 have died from COVID-19, the disease resulting from the virus.

Kevin Mitchell is chairman of the Business Travel Coalition. He is an expert in the ways large companies and governments can control travel costs. He notes that if a company puts an employee at risk, "you can be held responsible for their injury or death."

cosmetics – n. a substance (such as a cream, lotion, or powder) that you put on your face or body to improve your appearanc

standstill – n. a state in which all activity or motion is stopped

cybersecurity – n. ways to keep internet data away from criminals