Many Monarch Butterflies Not Flying South for Winter

Update Required To play the media you will need to either update your browser to a recent version or update your Flash plugin.
By John Russell
07 November, 2017


For many Americans, monarch butterflies are a sign of changing seasons.

In the late summer and early autumn, the butterflies fly south, from Canada and the United States' mainland to Mexico.

But Darlene Burgess still keeps seeing the bright, colorful insects – and she lives in Canada.

Burgess keeps counts of Monarch butterflies at Point Pelee National Park in Ontario. "As nice as this [the large numbers of Monarchs] is to see, I really wish I wouldn't see it because they're running out of time," she said. "It's really not good for them." 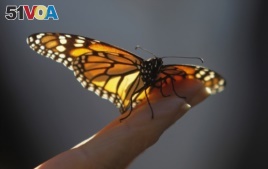 Monarchs are not just staying in Canada. Groups of them have been seen north of the Mexican border, such as the American state of New Jersey. Their large numbers are not normal for late October.

Monarchs normally arrive in Mexico around November 1st. The number of "stragglers" in Canada and the U.S. is "definitely new territory for us," said Chip Taylor, a biology professor at the University of Kansas. He also is the director of Monarch Watch, an organization that studies the butterflies.

Now, they may be stuck because temperatures are starting to fall.

Elizabeth Howard is a biologist and director of a non-profit group called Journey North. She said the Monarch's muscles do not work well when temperatures go below 15 degrees Celsius.

If the butterflies do not freeze, they are likely to starve to death because many of the plants they eat are gone for the season, Howard noted.

Monarchs have faced a number of problems in recent years. Habitat loss, climate change, and chemical pesticides have hurt the butterfly population, said Lincoln Brower, a biology professor at Sweet Briar College. Brower has been studying the butterflies since 1954.

The colorful creatures also have a decreasing food supply – especially in the form of milkweeds, which are the only food they can eat when they are caterpillars.

Taylor notes that this year may not be as bad as some of the most recent years. The 2013-2014 season was especially bad.

Seth Borensten reported on this story for AP. John Russell adapted his report for VOA Learning English. George Grow was the editor.

straggler – n. a person or animal that moves slower than others and becomes separated from them

habitat – n. the area where a plant, animal or insect normally lives

pesticide – n. a product that kills animals or insects that damage crops

milkweed – n. a type of North American plant that has white juice

caterpillar – n. a small creature that is like a worm with many legs and that changes to become a butterfly or moth