Many North Koreans Depend on Informal Markets

Update Required To play the media you will need to either update your browser to a recent version or update your Flash plugin.
By Phil Dierking
12 November, 2017

The food comes from taking leftovers from making soy bean oil, pressing it and rolling it into a paste. The result is then filled with rice, and topped with chili sauce.

Injogogi is traded in North Korea with other goods and services on informal markets, known as jangmadang. Defectors from North Korea say there are hundreds of these markets. They are part of the country's "barter economy." This informal market system has helped people survive through years of sanctions and separation from the rest of the world.

"Back in the day, people had injogogi to fill themselves up as a substitute for meat," said Cho Ui-sung, a North Korean who defected to the South in 2014. "Now people eat it for its taste."

After World War II, North Korea was established with support from the Soviet Union as a socialist country.

The collapse of the Soviet Union in 1991 severely hurt the North Korean economy. It also led to the breakdown of the centralized food distribution system. It is estimated that as many as three million people died in the following years.

People were forced to negotiate for food any way they could. 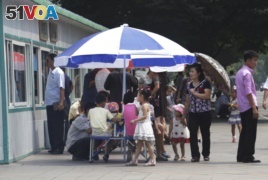 People line up to eat at a food kiosk in Pyongyang, North Korea.

Since then, studies have found that person-to-person dealings have become a way for millions of North Koreans to find basic needs such as food and clothing.

The U.N.'s World Food Program, or WFP, says the Public Distribution System for food was brought back in 2006.

The North Korean government says 70 percent of North Koreans still use the state's system as their main source of food. This is the same percentage of people that the U.N. estimates are "food insecure." The WFP says the system regularly provides lower food rations than the government's daily target.

The WFP and the U.N.'s other main food aid agency, the Food and Agricultural Organization, said the U.N. uses all available information, including official statistics. The agencies have an office in Pyongyang and make regular visits to North Korean Public Distribution Centers, farms and occasionally markets.

In a joint statement, the U.N. agencies said, "We recognize that the data and their sources are limited but it's the best we have available at present."

The agencies said that the biggest concern is the lack of different foods. The statement says main foods include rice, maize, kimchi and bean paste. These lack important fats and protein.

Last year, North Korea's economy grew by 3.9 percent – its biggest increase in 17 years. The increased activity came from mining, market reforms and business with its neighbor China. Reporters saw signs of hunger in North Korea as recently as 2013. The WFP says one in four children do not grow as tall as children in South Korea. However, defectors say the food supply has improved in recent years.

Eight defectors told Reuters they ate similar things to South Koreans. They said most families had privately grown vegetables, locally made snacks, rice, and corn in their homes.

Younger and wealthier defectors say they had meat, such as pork, dog, rabbit or badger. However, they said the meat supply was seasonal because electric power is not dependable enough to power refrigerators.

Some markets in North Korea are known as "grasshopper markets" for the speed that traders set them up and take them down. Many are illegal, but there are also officially approved markets.

Food such as injogogi are popular at these markets. It is low in calories but has protein and fiber, said Lee Ae-ran, a chef from the North Korean town of Hyesan.

The website Daily NK, which is based in Seoul, South Korea, reports on jangmadang markets. It is operated by North Korean defector journalists.

In a report released in August, it said there are 287 official markets in North Korea, including more than half a million stalls. Over 5 million people are either "directly or indirectly" depending on these markets for food. This means the markets are necessary for people's survival, the report said.

In 2015, a survey of 1,017 defectors by Seoul University professor Byung-yeon Kim found that official food sources only make up 23.5 percent of North Korean's food.

Around 61 percent of people asked said private markets were their most important source of food. Fifteen-point-five percent said they rely on self-grown food.

More options for the wealthy

However, wealthy people in North Korea have more choice. In the capital, people can order a pizza in one of Pyongyang's hundreds of restaurants, visitors say. Many of the restaurants are owned by the state. Some used to be only for tourists, but now they have local customers, who sometimes pay in euros or dollars.

There are also other ways North Koreans can support their diets.

"My dad often received bribes," said one 28-year-old defector. She said he was a high-ranking public official, and the bribes he received included goat meat, dog meat and deer meat, she said.

This story was originally written for Reuters by James Pearson and Seung-Woo Yeom. Phil Dierking adapted the story for VOA Learning English using other media. Mario Ritter was the editor.

How do people get their food in your country? We want to hear from you. Write to us in the Comments Section or on 51VOA.COM.

distribution - n. the act of giving or delivering something to people

defector - n. people who have left a country, political party, organization, etc., and go to a different one that is a competitor or an enemy

barter - v. to exchange things (such as products or services) for other things instead of for money

sanction - n. an action that is taken or an order that is given to force a country to obey international laws by limiting or stopping trade with that country, by not allowing economic aid for that country, etc.

substitute - n. a person or thing that takes the place of someone or something else

paste - n. a soft, wet mixture of usually a powder and a liquid

ration - n. a particular amount of something (such as gasoline or food) that the government allows you to have when there is not enough of it

regular - adj. happening over and over again at the same time or in the same way : occurring every day, week, month, etc.

occasionally - adv. sometimes but not often

refrigerator - n. a device or room that is used to keep things (such as food and drinks) cold

relax - v. to become or to cause (something, such as a rule or law) to become less severe or strict

journalist - n. a reporter; a member of the press

stall - n. a small open counter or partially enclosed structure where things are displayed for sale

survey - n. an activity in which many people are asked a question or a series of questions in order to gather information about what most people do or think about something

diet - n. the food that a person or animal usually eats

bribe - n. something valuable (such as money) that is given in order to get someone to do something

high-ranking - adj. having a high rank or position; important