Update Required To play the media you will need to either update your browser to a recent version or update your Flash plugin.
By Caty Weaver
11 January, 2019


When people use maps, they are usually seeking directions to a place they want to go.

But Susan Schulten sees much more in maps, like history, culture and art. She shares some of those findings in her book, A History of America in 100 Maps.

Schulten travels back in time, using maps of the past. Her book explores the hopes, dreams and fears of ordinary people dating back to before the United States came to be.

"There is practically no area of American history where maps don't sort of enrich our understanding," Schulten said. "Maps record past scenarios, past situations, past relationships of power, but they also influenced people at the time in terms of future decision making."

Schulten is a history professor at the University of Denver, in Colorado. She studies cartography, the making of maps. During her research, she became very interested in a series of maps made by American schoolgirls in the early 1800s. The detailed maps appealed to her not only for their beauty, but also because of what they taught about a little-known period in American education. 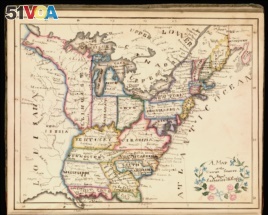 From 1790 to the 1830s, thousands of schoolgirls, including Catharine Cook in 1818, displayed their knowledge of geography, art, and penmanship in painstakingly produced maps. (From "A History of America in 100 Maps"/Courtesy of Osher Map Library)

"New schools educating young women for the first time outside the home prepared a curriculum that involved teaching them not just geography but map drawing," she says. She says the girls studied technical methods of art, writing and understanding geography by creating their own maps.

The schools for girls were open for only a short time. Knowledge of them might have been lost if not for the maps they left behind.

Schulten says those early maps also helped establish a national identity and loyalty for the United States in its early days.

Schulten says that most American colonists were first loyal to their colony and then to the King of England. After independence, schools became a place to establish a shared meaning of the new country.

"There's such an emphasis after the Revolution on using education to help create a civic identity and it becomes readily apparent," Schulten says.

The book also includes some Native American maps. They help shape an understanding of how Natives saw power relationships. A 1721 map, most likely made by a Cherokee leader, includes a number of circles. The sizes of the circles are linked to the perceived power of the individual tribes.

"It's a representation of space from a non-European perspective," Schulten said.

Some maps in the book recall dark moments in American history.

An 1885 report on the Chinatown neighborhood in San Francisco, California, helps tell of the racism that Chinese laborers experienced. These immigrants had helped build the transcontinental railroad. After it was complete, many of the workers settled in San Francisco.

A report commissioned by city supervisors described the Chinese in extremely offensive race-based terms. A map made for the report shows opium places, gambling establishments and houses where sex was sold in Chinatown.

The message of the report and map was that the Chinese should be removed.

From political moves like gerrymandering, to advertising, to "red" and "blue" states, maps tell many American stories. They can also be used to push reform, and help to set the country on a new course.

Schulten says there were maps used to support the anti-alcohol movement, the opposition to slavery and the fight gain voting rights for women.

A History of America in 100 Maps includes maps never before published, Schulten said. Others are well known. But all can provide a special understanding of America's past.

Dora Mekouar wrote this story for VOA's blog All About America. Caty Weaver adapted it for Learning English. Ashley Thompson was the editor.

scenario - n. a sequence of events especially when imagined

geography - n. the natural features (such as rivers, mountains, etc.) of a place

emphasis - n. special importance or attention given to something

opium - n. a powerful illegal drug that is made from a type of poppy

gerrymandering - n. to divide (a state, school district, etc.) into political units that give one group an unfair advantage